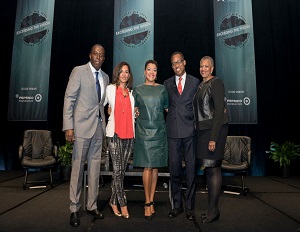 The Executive Leadership Council held their 21st Annual Mid-Level Managers’ Symposium last week at the Gaylord National Hotel in National Harbor, Maryland, where nearly 800 black professionals from across the country convened to get insights on how they can take their careers to the next level.

Starr Cos. Vice President and Chief Marketing Officer, Leilani Brown, served as the event’s emcee while Carla Harris gave the keynote address. Harris, who is an author, speaker and Morgan Stanley executive, spoke to the room about the importance of relationship currency.

“Your ability to ascend in any organization will be based on someone’s judgment of whether or not you’re ready,” she told the audience of black professionals.

She described relationship currency as “the investment you make in the people in your environment” and stressed that solid relationships in the workplace are what gets you the promotion you’ve been eyeing, the salary raise you desire and outside contacts who can help to elevate your career.

Following Harris address, executives Tara Jaye Frank from Hallmark Cards, Oral Muir from Marriott, Geri Thomas from Bank of America, and Chris Simmons, a retired executive from PricewaterhouseCoopers, offered tips and strategies for helping black professionals climb the corporate ladder. When asked what piece of advice they would give their 20-something self, both Simmons and Thomas agreed that they wish they would have understood the value of global connections, while Thomas added that she wished she would have invested more time into learning new languages.

For Frank, who opened up about her career journey at Hallmark and the impact of working alongside the late Maya Angelou at an early age, she said she wished she would have known the importance of owning her position.

“I wish I knew I was worthy of wherever I am,” Frank said.

Following two days of panel discussions, breakout sessions, and networking, attendees of the MLMS attended the 27th Annual Executive Leadership Foundation’s gala where former Attorney General Eric Holder, Merck Chairman and CEO Kenneth Frazier, and Caterpillar Inc. were honored. With nearly 2,200 professionals in attendance, one of the biggest highlights of the night came when Cisco Systems Inc. offered one of The ELF’s scholarship recipients a job on the spot. 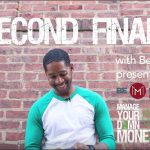