A good teacher can affect a whole life 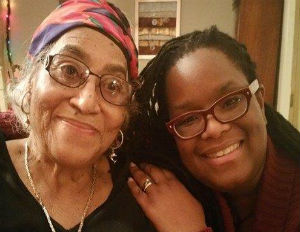 This post was written by Marilyn Rhames and originally appeared atÂ EducationPost.org. It is edited and reprinted here with permission.

[Related: Send Your Kids to College Without Going Broke]

If you haven’t seenÂ this videoÂ demonstrating the power of a good teacher, stop reading this blog now and watch it. You’ll see the tearful surprise that high school chorus teacher Gabrielyn Watson received as she returned to work after a seven-month battle with cancer.

Keep a box of tissue handy.

I once assumed that every student had a Ms. Watson–one teacher who understood them, inspired them, and made a deep and lasting impact on the trajectory of their life.

But I was wrong.

When I asked Renee, my best friend from high school, who her favorite teacher was, she said, “I never had one. In the four years, I can’t think of a single teacher who tried to connect with me.â€

My “Ms. Watsonâ€ was Pauletta Saxon, my high school counselor at Corliss High School. Let me tell you why this matters.

As a chorus major, I wasn’t allowed to take honors courses. After earning straight A’s in ninth grade, I went to Mrs. Saxon to ask for more academic rigor. She directed me to the program office, where I was told no, and then tried again elsewhere, and was denied again. I auditioned for and was accepted into the music program, which was on a totally different track from the honors program, thus I couldn’t make the change.

In my desperation, I went back to Mrs. Saxon and implored her to do something. She said she wanted me to fulfill my potential and fought to have me switched into the honors program. We’ve had a special bond ever since.

Mrs. Saxon ran the Principal Scholars program, which emphasized college attendance and gave inner-city kids early college experiences. In my junior year, she even persuaded my doting, overprotective mother to let me spend four weeks at a summer enrichment program at the University of Illinois at Champaign-Urbana.

Now I hold two master’s degrees that I didn’t have to pay for, and I have a thriving career in journalism and education.

I wonder what path my life would have taken if I had not demanded to be put on the honors track. I probably wouldn’t have gotten to know Mrs. Saxon so well. I might have been just another name on the list of 300 students she had to advise. I doubt I would have participated in the Principal Scholars program or gotten help filling out the FAFSA.

That’s why I believe that all students at the same school should be entitled to the same college-preparatory resources regardless of what track they’re in.

Every kid needs a champion.Â I had mine and she helped shape my life.

Marilyn RhamesÂ has taught in district and charter schools in Chicago for the past 11 years and currently serves as alumni support manager at a K-8 charter school. A former New York City reporter, Rhames writes award-winning education commentary featuredÂ onÂ Moody RadioÂ in Chicago.Â She is a 2016Â Surge Institute FellowÂ and the founder of the Christian nonprofit,Â Teachers Who Pray.

Will the â€˜Pay Gapâ€™ Between Serena Williams and Maria Sharapova Close?