Eric Holder to Join Board of NAACP Legal Defense Fund 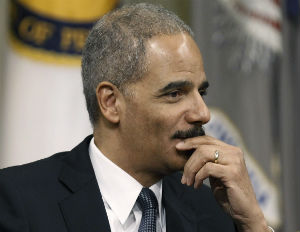 The NAACP Legal Defense and Educational Fund has announced that Eric Holder is set to join the organization’s National Board of Directors.

Appointed by President Obama in 2009, Holder was the first black attorney general of the United States. During his tenure under the Obama administration, Holder prioritized voting rights and criminal justice reform.

Holder’s connections to the Legal Defense Fund run deep. The former attorney general interned for the LDF in 1974 after his first year at Columbia Law. Last year, Holder received the Thurgood Marshall Lifetime Achievement Award, which the LDF calls its “highest honor.”

Current LDF President, Sherrilyn Ifill, has spoken highly of Holder. “I have been unequivocal in my admiration for Mr. Holder’s leadership. He presided over the restoration of the Civil Rights Division of the Department of Justice, launched the groundbreaking criminal justice reforms of President Obama, and confronted the challenges in Ferguson, Missouri, with tremendous sensitivity during a volatile time in our nation,â€ Ifill said.

In a statement announcing his appointment, the LDF praised Holder for his ‘Smart on Crime’ initiative, which called for “major changes to drug sentencing, the release of elderly prisoners and a decreased length of non-violent crime sentences, were bold measures that will continue to have a major impact on African American communities and are emblematic of LDF’s vision of justice.”