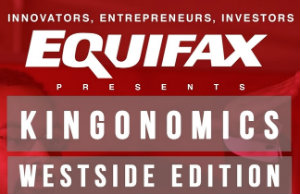 From November 20-21, 2015,Â Kingonomics, the definitive advocacy and learning platform for the disruption of poverty in underserved American communities and beyond, is hosting its first Kingonomics Innovation Corridor on Atlanta’s Westside.

Through a series of events such as #StartupHigh, #StartupLounge, and Idea Hackathon, attendees will have a great opportunity to learn about career opportunities like innovation and engineering, learn to think and ideate like an innovator, and hear engaging talks from entrepreneurs such as Nicole Garner, founder of The Garner PR firm; Travis & Troy Nunnally, Tech Twins co-founders (Brain Rain Labs); and Princess Sampson, a 15-year-old software engineer.

Based on the economic ideals of Martin Luther King Jr., Kingonomics is a book by Rodney Sampson; serial entrepreneur, investor, and author. When it comes to the differences between race and entrepreneurial success, Sampson believes theÂ African American community suffers from “not dreaming big enough and not building scalable companies,” he told BlackEnterprise.com exclusively.

“Given the fact that we have to catch up, particularly in high-growth areas like tech and innovation, I think teaching kids about entrepreneurship should begin when a mom is talking to her baby in her womb. This week, as part of the Kingonomics Westside edition, we went to several classes to deliver #StartupHigh courses. It takes us a few minutes to get students engaged. We have to educate them up about the wealth gap between whites, Asians, blacks, and Latinos. Once we show them the poverty rate and average net worth of a black family being $11,000 compared to a white family being $140,000, that’s when they wake-up and get involved in wanting to know how we can close the gap. So we as a community need to be introduced to the ‘save, start, and invest’ concept very early on,” said Sampson

According to a press release statement, the Westside community was chosen because it is characterized by the urban ills common to many American inner cities–poverty, homelessness, teen pregnancy, vacant housing, lack of viable opportunity, and rampant unemployment. Kingonomics will introduce its proposed solutions for combating this community’s ills during a series of interactive and engaging events for Westside influencers, future innovators, aspiring entrepreneurs, and high-schoolers interested in learning to code, hack, start a business and create something from nothing.

Here’s a snapshot of the courses taking place on Saturday, November 21, at the Cascade Fun Center.

#StartupLouge. The Kingonomics’ #StartupLounge is a high-level inspirational and experiential series of engaging talks, conversations, and panels presented in a casual and easy-to-understand format for aspiring and new entrepreneurs. We’ll learn to build something from nothing. We’ll learn the facts about coding and the million+ jobs that are available. We’ll explore access to capital. Program partners include Opportunity Hub & TechSquare Labs.

Idea Hackathon + Pioneer Pitch Competition. A Hackathon is an event, typically lasting several hours to several days, in which a large number of people meet to engage in collaborative thinking and/or computer programming to solve problems. This intense and competitive approach is designed to introduce ideation and design thinking methodologies. We hope to bring together 500 high-schoolers to teach them how to build something from nothing by learning to think and Â ideate like an innovator. Program partners include CEO of My Life, Brain Rain Labs, and Â Amplify for Good.

Kids Drone Zone & Big Thinkers Science Lab. This programming is provided for attendees that don’t participate in the Hackathon. In a few years, some believe that drones will be everywhere. To this end, we’ll expose students to the innovative, robotic hardware and software that will impact nearly every area of their (and our lives) in the coming years. Additionally, early access to science, technology, engineering arts/aviation/agriculture and math (S.T.E.A.M) is very important to ensure that youth become interested and engaged in the opportunities related to this growing ecosystem of opportunity. Program partners include Big Thinkers Science Academy, Kids Drone Zone, and Â KidzMic.