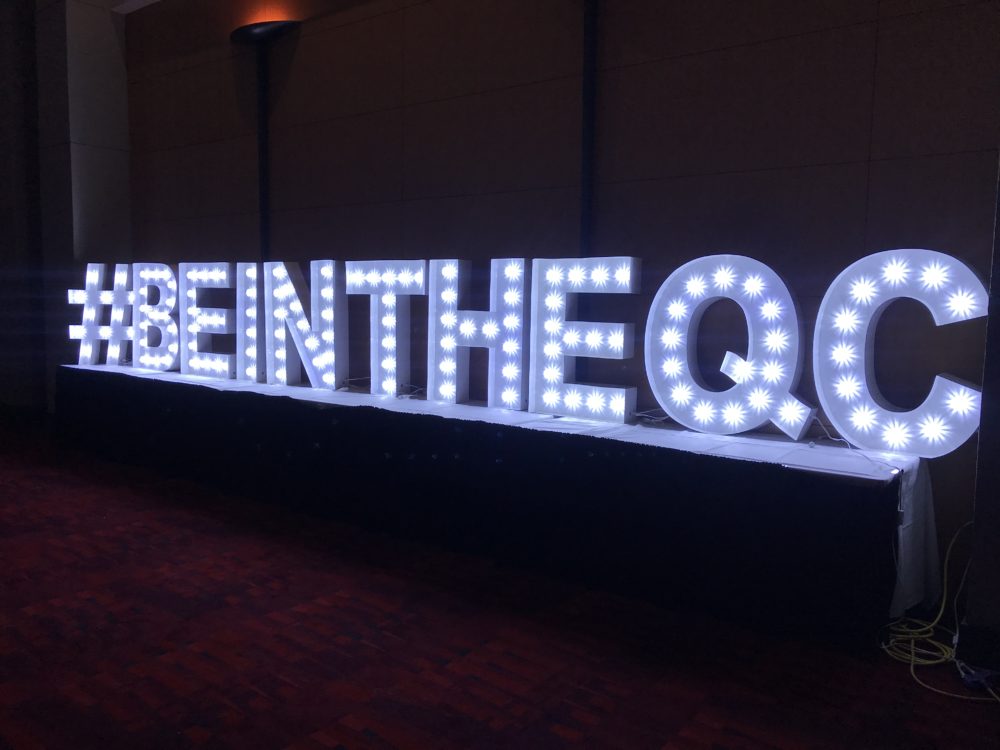 BE is officially in the QC! And on day one of the Entrepreneurs Summit presented by Nationwide, we proudly welcomed 1,200 entrepreneurs, business owners, and professionals to the event in downtown Charlotte.

In the first hour of the summit, we kicked off the afternoon with the ultimate speed networking session with Social Entrepreneur, Founder of Smart Hustle Magazine, and host for the Summit. Hundreds of entrepreneurs and small business owners filled the Charlotte Convention Center for an hour of intentional networking. Within moments of being in the room, attendees were on their feet introducing themselves and sharing what they do for a living. And shortly after, they broke out into small groups where they offered one another business advice and shared marketing strategies in an effort to give as they connected. Countless connections in the spirit of this year’s theme: build, connect, elevate.

Check out the Day 1 Photo Gallery!:

Later in the evening, attendees were welcomed to the city by Kevin S. Dick, deputy director of economic development at City of Charlotte, who spearheaded the steering committee for the event. After his warm welcome, he introduced Derek T. Dingle, SVP and chief content officer at Black Enterprise; Charlotte Mayor Vi Alexander Lyles; and Columbia, South Carolina Mayor Stephen K. Benjamin for a fireside chat on doing business in the Carolinas. During their time on stage, the leaders discussed matters from government contracting to smart cities. And they both spoke candidly about the initiatives in their cities and opportunities for minority-owned businesses in their respective cities.

And when it comes to engaging minority businesses in Charlotte, Mayor Lyles says, “In our community, I’ve found that minority businesses have several alliances that they have formed. And they insert themselves in the process.” That allows her to go the private sector to advocate for them. What’s key for Mayor Benjamin as he secures more opportunities for small business is access and transparency. “We try to make sure that we reach throughout our economic spectrum,” says Benjamin. And that is why he says that he has been intentional about forming partnerships for the betterment of all parties involved when doing business.

Throughout the conversation, entrepreneurs sat on the edge of their seats listening and taking notes.

As the night proceeded with priceless information, Lu Yarborough III, vice president of Diverse & Cause Marketing at Nationwide, shared remarks with attendees on behalf of the host sponsor.

And the moment everyone was waiting for in anticipation finally arrived! President & CEO of BLACK ENTERPRISE, Earl “Butch” Graves Jr. took the stage to greet the crowd with enthusiasm and introduce and welcome Mark Cuban, owner of the Dallas Mavericks, for a thought-provoking conversation on his journey as an entrepreneur and businessman. Cuban shared how his grit and determination as a 12-year-old salesman who sold garbage bags door to door helped shaped him into the entrepreneur that he is today and shared why being able to make a sell is the foundation of good business. “Selling is always about helping and listening to people and understanding what their needs are,” says Cuban. Graves also added, “Scale comes through sales.”

The fireside chat was nothing short of dynamic as Cuban spoke about everything from having a unique advantage as an entrepreneur to politics and diversity in the workplace where he gave special recognition to Cynthia Marshall, CEO of the Dallas Mavericks, who is the first black woman to head an NBA franchise.

After sharing countless tips and answering questions from the audience Cuban’s time wrapped up with a standing ovation.

And that’s not all, the excitement continued as conference goers gathered for the opening reception presented by Nationwide where they enjoyed Southern cuisine and a karaoke competition where a lucky entrepreneur won an Apple Watch.The food was flowing and the live entertainment of the competition had people smiling ear-to-ear. It’s fair to say that day one was a success and we’re looking forward to the rest of the Summit and all that our speakers and sponsors have to offer.

For the latest updates on the summit and live coverage, click here to tune into three days of content you can’t get anywhere else! Be sure to download the event app, Bizzabo, in the Apple Store or on Google Play. And be sure to join our online community of entrepreneurs and small business owners.

Day two of BE in the QC was a huge success. Early birds got the worm and made the most connections, during the Rise & Grind Breakfast where they networked. Ramon Ray, the host of the Summit, welcomed attendees to the main ballroom with enthusiasm as he held an impromptu singing competition where attendees sang our host Sponsors jingle, “Nationwide is on your side!” And it just so happened that there was some real talent in the room! Moments later two contestants participated in our first-ever Pop-Up Pitch competition and it was nothing short of great. And that competition was followed by a brief Nationwide video and remarks by Mia Hairston, chief diversity & inclusion officer at Nationwide.

City Council member James Mitchell, chair of the Entrepreneur Summit’s Steering Committee, also gave remarks where he led the audience in chanting, “BE In the QC” and highlighted the great work of Charlotte. Mayor Vi Alexander Lyles also joined us in the morning and declared that June 4–6 of every year, Black Enterprise Week in the City of Charlotte!

Check out the Day 2 Photo Gallery!:

Shortly after, Derek T. Dingle, SVP and chief content officer of Black Enterprise, kicked off with an engaging fireside chat with media mogul Byron Allen, CEO of the Weather Channel and Entertainment Studios, for an inspiring conversation on how he became the mogul that he is today after starting his career at just 13 years old.

Allen opened with jokes about not having a subscription to Black Enterprise growing up although he grew up reading the magazine. He then spoke about a few moments that changed his life. The first was the summer of 1968 where he reflected on the assignation of MLK, moving from Detroit to Los Angeles, and his mother’s persistence to become a media maven after graduating high school.

She created an internship for herself by asking for a team to be built around her and later became a tour guide at NBC. “Converting that one no into a yes converted the trajectory of our lives, said Allen

Allen also spoke about landing his first paid comedy job with a celebrity and learning about how to turn show business into what he calls business show so that he could leverage every opportunity. And he closed by saying that adversity was one the best teachers and things that shaped him in life.

Immediately following Allen, Troy Taylor, chairman & CEO at Coca-Cola Beverages Florida, joined Earl “Butch” Graves Jr., president & CEO of BLACK ENTERPRISE for a groundbreaking conversation on education, sports, business, and faith and how that shapes how he does business. Some of the informative and empowering sessions that were held throughout included seminars on how to map out your achievement featuring MC Lyte and Dr. Lynn Richardson presented by Nationwide; how to make money on social media; data mining for small businesses; principled entrepreneurship hosted by Koch Industries; accessing capital; and a business and beer conversation featuring Damian and Jermaine Johnson, co-founders of No Grease Inc., and Remy Ma, owner of Conceited The Store, presented by MillerCoors and led by Steve Canal, National Community Affairs Lead at MillerCoors and a BE Modern Man.

The BizHub was also bustling for the second day in a row and the second round of the Pop-Up Pitch went down! Attendees were able to get free professional headshots provided by Nationwide, get goodies from vendors and write their goals on wrapped Toyota SUVs presented by Toyota. And Food-Truck Thursday was the ultimate taste of Charlotte! And that’s not all, tomorrow morning we’ll be back at it again for the final day of #BEintheQC.

For the latest updates on the Summit and live coverage, click here to tune into three days of content you can’t get anywhere else! Be sure to download the event app, Bizzabo, in the Apple Store or on Google Play. And be sure to join our online community of entrepreneurs and small business owners.

Just when we thought that the Entrepreneurs Summit couldn’t get any better, day three was one for the books! The morning opened with a productive networking breakfast and attendees shared their testimonials about their time at the event along with tips for success as others seek to build, connect, and elevate their businesses. That uplifting moment was followed by an energizing fireside chat with Janice Bryant Howroyd, founder and chief executive officer of The ActOne Group and Caroline Clarke, chief brand officer, Women of Power at Black Enterprise on how she made her first million dollars.

Bryant Howroyd spoke passionately about the value of quality leadership and knowing your role as a CEO so that you can best serve your team and grow your company. She also spoke about the importance of keeping up with and implementing new technology as a business person and owning your power as a woman in business.

After their conversation, Ed Gordon, Emmy Award-winning broadcaster at BET Network took the stage with the one and only Tip “T.I.” Harris, entrepreneur, entertainer, actor, and founder of Grand Hustle Records for a dynamic conversation about his unconventional journey to entrepreneurship. The audience was enamored with how open he was about his past and learned about all the moments that led to him becoming the boss that he is today.

The excitement kept flowing as we hosted the highly anticipated Level Up! Pitching for Dollars elevator pitch competition co-hosted by comedian Kier ‘Junior’ Spates and Ramon Ray, founder and editor of Smart Hustle Magazine, where four black women entrepreneurs took the stage for their chance to win $10,000. After each pitch, the contestants received feedback from judges Earl “Butch” Graves Jr., president & CEO of BLACK ENTERPRISE; Janice Bryant Howroyd; and Dawn Dickson, founder & CEO of Flat Out of Heels and PopCom. During the judges’ deliberation, three attendees who pitched during our first-ever Pop-Up Pitch Competition took the main stage for their chance to be named The People’s Choice Winner. Kimba Williams, CEO & co-founder of Kushae by BK Naturals now holds that title! And after two rounds of pitching and much deliberation, Jennifer Lyle, Founder of Lush Yummies Pie Co. walked away with a check for $10,000 for her pitch that was as good as her pies. Throughout the day, attendees packed out rooms for engaging sessions on doing business at the airport; government contracting, presented by Koch Industries; lessons from the C-suite, hosted by Toyota; women and entrepreneurship; and so much more. And when attendees weren’t taking notes and being inspired, they were busy roaming the BizHub chatting with exhibitors and checking out sponsored activations. They even got a chance to meet Black Enterprise editors.

Later in the evening, we gathered to celebrate and recognize the entrepreneurs of the year co-hosted by Ed Gordon and Erica Bryant, co-anchor at WSOC-TV. And Gale V. King, executive vice president, chief administrative officer at Nationwide, and Terrance Williams, executive vice president, chief marketing officer & president, Emerging Businesses at Nationwide opened with inspiring words. Immediately following, the small businesses and companies of the year were honored and the honorable Harvey B. Gantt received the Trailblazer Award. The night was nothing short of uplifting and the following morning people gathered for a bonus session on doing business in Charlotte, making deals, leveraging social media, and essential business growing tools.

It’s fair to say that we covered it all this year! But it wouldn’t be possible without all of the professionals who invested in the Summit and themselves and our host sponsor Nationwide.

Thank you to all of our sponsors and we can’t wait to see you next year at the Entrepreneurs Summit!

Check out the Day 3 Photo Gallery!: 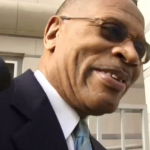 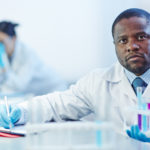