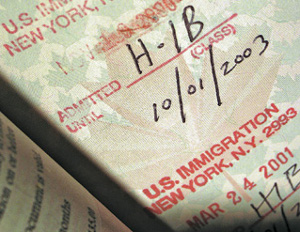 On February 5th, entrepreneurs will head to Washington D.C. to call for new Visa rules that they feel are necessary to help their companies grow. One of their major demands include letting the market, and not the current quota system determine how many skilled-worker visas are issued. Skilled-worker visas, more commonly known as H-1B’s are issued to workers from other countries that have specialized proficiencies, usually in computers and other technical fields.

Start-ups say they have trouble finding all the staffers they need in order to grow their businesses because it’s too hard or time consuming to hire workers from China or India because of all the paperwork and governmental regulations involved. They also feel the process to sponsor a candidate’s Visa is too expensive, especially for a small business owner.

Silicon Valley has support immigration reform for high-skilled workers, and many companies have voiced support for comprehensive reform, as long as it meets their goal of winning more Visas for potential employees. One requirement vocalized by many U.S. software developers and engineers is the requirement that companies pay workers the same wage as an American worker, so as not to undercut the market with cheap labor. Another suggestion would be waiting for a company to be a proven creator of jobs before issuing Green cards to its workers.