How do you make a comeback? That question is probably on your mind if your business is among the companies that barely escaped extinction during the recession and depression of 2008 and 2009, respectively.Â  Well, Shane and Shawn Ward, co-owners of SHANE&SHAWN shoe company, have a very simple answer: scale back. The Ward twins launched SHANE&SHAWN in 2003 and were successful right off the starting block. But when the recession hit, their sales began to dwindle. They lost 30% of their business between 2008 and 2009.

Today the Ward brothers plan to join other entrepreneurs on the Failing Forward & Bouncing Back: How to Keep Moving When You Get Knocked Down panel at the Black Enterprise Entrepreneur’s Conference + Expo in Atlanta, May 16-19. When I met them yesterday before the welcome reception, I was curious to learn why they seemed to be in such great spirits when they were here to participate in a panel about business failure. But after speaking with them, it all made sense.

“We had our own boutique in Manhattan and saw that people just stopped shopping. Not only did [New Yorkers] stop shopping, but people who regularly visited New York stopped coming,â€ says Shane, who with his brother, designed footwear for Fila, Reebok, and several other athletic companies before breaking out on their own . “That hit us right away. We saw income from our store basically get cut in half as soon as the recession hit.â€

But now, first quarter 2010 revenues are 50% higher than they were the first quarter in 2009. What made the difference? They learned to operate leaner and more efficiently. Originally, the Wards’ business model included them acting as the company’s manufacturer. But during the recession, many of their wholesale customers went out of business. When money stopped coming in, it affected their ability to create new product lines. They also could no longer afford to participate in expensive trade shows to find new wholesalers.

But the brothers realized that their cash flow problem was not entirely a result of the economic downturn. Before the recession, they had a full-time sales person, an operations person, a logistics person who dealt with all of the orders from China, and trade show [staff]. The way they did business, a lot of cash was needed up front. Without that cash coming in, they were forced to stop manufacturing their own shoes. And it might have been for the best.

“It felt like a big weight was taken off of us,â€ says Shawn. “And we asked ourselves, when we go back to it, do we really want to put that weight back on.”

They realized that licensing their shoe line to a bigger company and focusing their efforts on selling their shoes online was the solution to their overhead problem.Â  By getting rid of all of the infrastructure that was needed to be a manufacturer, they decreased expenses by 75%. Letting go of the tradeshow circuit also gave them more time for marketing and design.

“Now the companies that license in our name pay for all of that, and we get royalties. But we don’t have to spend so much money to get that revenue,â€ says Shawn.

A lot of the Wards’ rebound success resulted from them putting a much bigger emphasis on online sales than they had in the past, a strategy that has exponentially increased revenue, just over the first few months of this year. The funds they were using for all of their operations and their overhead was put toward updating their Website, online advertising, and taking advantage of all the social networking sites.

Marcia Wade Talbert is a writer and content producer at BlackEnterprise.com. 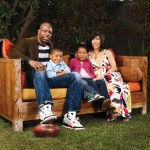 2010 Entrepreneurs Conference: How to Network at a Conference