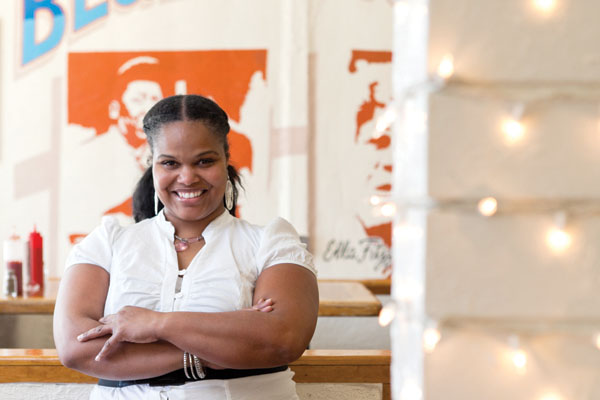 When Tamearra Dyson opened the doors to her Oakland restaurant Souley Vegan, she had nothing but $30 in the cash register and a lot of faith. Only one prerequisite away from earning her nursing degree, she decided to follow her heart and open a business.

Through hard work and the aforementioned unwavering faith, the eatery and catering service will now be celebrating its 4th anniversary this July and has been voted Best of The East Bay 4 years in a row.

Before opening, Dyson subscribed to Black Enterprise to receive stories of encouragement from other entrepreneurs, so it’s only fitting that she return the inspiration by making her Entrepreneur of the Week.

What made you venture into such a competitive business?

I became vegan when I was 17 and started cooking vegan food at the age of 18. My recipes are a result of my experimentation. I love to cook and felt I had something to offer the world. I’m offering a food style that while traditional, has a vegan spin.

What was your start-up cost?

It was around $80,000. I am a single mom and my son and I worked the farmers markets, catered events etc. I would travel across the San Francisco Bridge for a $100.00 catering order because I needed the money. I never received any loans or grants, so all of my [funding] has been through hard work and prayer.

How has the African American support been throughout the process of becoming an entrepreneur?

The African-American community has been supportive in wanting to see us grow and has expressed how proud they are of what I have accomplished and the fact that the business seems to always get better and is run professionally. So I am extremely proud of that recognition.

What are some of the challenges you have faced being black—owned business in the health and wellness industry, if any?

I have not received any help or recognition from the city, even though Souley Vegan attracts people from all over the world! Also, being black-owned comes with preconceived ideas about the African-American diet and some may be skeptical that we don’t know what health food is. However, I am happy to say that I have proved them wrong. My food is healing food.

What advice to do have for future entrepreneurs?

Follow your heart and the money will follow. Absolutely nothing is impossible and make sure to separate yourself from the people that tell you different.

What do you think about the Vegan lifestyle going mainstream?

It definitely has brought more awareness to the vegan lifestyle. I became vegan before it was a trend so I [initially] got laughed at. In fact, I don’t even think we called it vegan. I do hope that it will help to permanently convert people to a vegan lifestyle that is free of animal cruelty.

[Take a look at] the documentaries of how they treat and handle the animals before it gets to your plate so you can be educated on what you’re consuming.

What’s in store for you in the near future?

I am very much working on expanding the business. I am not only working to have multiples locations in the future, but also a frozen food line. I would also like to become a motivational speaker, so I speak at different events. I have a story to tell starting from the age of, 4 that I know can help others.

Health and Wellness Editor, Suncear Scretchen is a Certified Holistic Health Coach and Ayurvedic Counselor who wants to help make the world a healthier place. Share your thoughts and ideas with her on Twitter (@ConsciousChick).