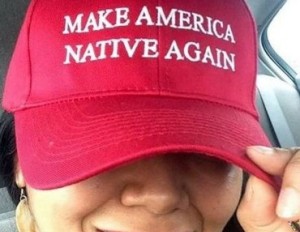 Injustice Against Native People and Others

Â Vanessa Bowen, a Navajo artist and entrepreneur, created a “Make America Native Again” hat to incite conversation around the marginalized population of indigenous people in the U.S. “A lot of people overlook that America’s history has been built upon injustice against other racial groups, including Native people,” Bowen, 31, states.

The inspiration behind “Make America Native Again” comes from learning and respecting the Native American values and culture that has been erased by colonialism, and whose values have been under attack by Trump. Her design was built on satire to turn the conversation of “Make America Great Againâ€ in on itself.

“When Donald Trump says, ‘Make America Great Again,’ what time period is he talking about?” Bowen told ABC News. “A lot of people overlook that America’s history has been built upon injustice against other racial groups, including Native American people.”

She also told ABC News that she hopes that her slogan, and her pointed critique of Trump, will “spread more awareness about Native Americans and encourage more natives to write and tell our own stories so more people can know the truth and don’t have to rely on these false stereotypes.”

Reportedly, she originally only made 12 hats for her friends, but soon received tons of requests and inquiries by people in her community. She has since received backlash, hateful messages online.

“You know it’s interesting how Trump, a rich, white man can be blatantly racist and it’s ok,â€ notes Castro, reports the Indian Country Today Media Network. “When people of color have a response, we are quickly shut down. We Native American people have an increasingly powerful voice that will not be silenced!â€

Bowen Creative is aÂ  graphic design firm. “Make America Native Again” hats, tanks, and other items, are on sale for $25 at its website.

Success in Business and Life Requires Growth and Resourcefulness