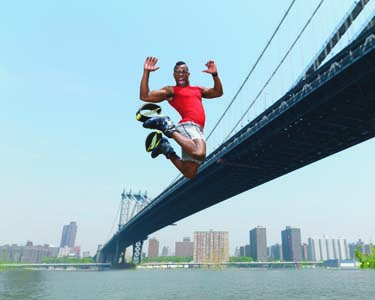 When Mario Godiva Green hops into his Kangoo Jumps boots he might be heading out to shop, run errands, or even go dancing at the club. It’s been reported that rebounding, the bouncing motion in jumping rope, on a trampoline, or in workout shoes like these, offers a variety of health benefits from improving cardiovascular health to cell regeneration, but Green says Kangoo offers many other fitness benefits.

A certified fitness trainer and runner averaging three to four miles during a workout, Green says he hit seven miles in the boots the first time he wore them. “I tried them on and went for a little run,â€ Green recalls his first impression four years ago. “It took pressure off my knees. When I ran I felt like my core was a lot more engaged. I ran longer than I normally would, and it was fun.â€

Impressed with the degree by which he could maximize his fitness training, Green became a distributor and created a grassroots fitness community in New York City called Kangoo Nation, which energizes those who are bored with typical workout equipment or who have been injured by stressing their joints. His recruits number close to 600, most of whom wear these high-tech boots for workout routines that range from running to plyometrics (exercise that rapidly stretches and contracts muscles, like jumping and rebounding).
For more information on the range of boots available, visit Kangoo Nation at www.mariothetrainer.com.