YesWeCode's Van Jones on The State of Silicon Valley 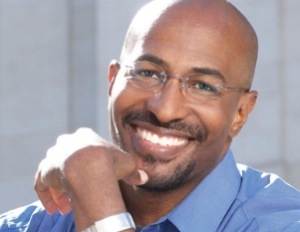 At the 18th Annual Rainbow Push Wall Street Project Economic Summit, leaders like the Reverend Jesse Jackson spoke on topics as diverse as the business of hip-hop to the current state of Silicon Valley’s diversity.

Here, Van Jones sat down with Black Enterprise to share how he felt about Intel’s $300 million commitment to diversity, and how intermediary organization #YesWeCode is trying to shape the future by funding a variety of programs to see what sticks.

The goal of #YesWeCode? 100,000 minorities in tech jobs by 2023, including Native American and Latino men and women. The goal is a lofty one, but Jones wholeheartedly believes that he, if the rest of the tech community steps forward, can achieve just that.

My hope is that there’s a competition between all the companies to do exactly what intel just did: talk about real money, real change internally to the company, even to the level of changing the way they do hiring and who’s on the Board. It’s only going to make Intel stronger, and I hope by the end of the year there are 10 companies making the same announcement as Intel.

A: As one of the founders of #YesWeCode, we aspire to become the United Negro College Fund of coding education. So our job is to help finance people who want to go to the coding boot camps. In three to six months someone can go from making zero dollars in this field to making $70-80 thousand a year.

When you have that kind of return on investment you can create a revolving loan fund that can become a perpetual motion machine, so a relatively modest amount of money invested in coding education can give results for a very long time.

So a lot of it depends on which solutions are funded, so we’re hoping that #YesWeCode will be one of the main solutions that does get funded. It’s a start. The reality is, if they invest $300 million and then over time, because of the changes that are made, Intel becomes radically more profitable then they’ll invest another $300 million.

Q: Can you explain #YesWeCode?

A: #YesWeCode aspires to become the UNCF of coding education. We’re working to raise a fund that would both find and finance people going to these new bootcamps. Right now you have some bootcamps that are really extraordinary but are too small, too expensive, and not diverse. By having a large fund that could help to popularize the idea of coding education, find people who want the education and help finance their education, we can help the bootcamps grow and become more diverse.

Q: Are you using these bootcamps to replace a traditional education so you won’t need to go to college?

A: Whenever I’m in Silicon Valley I’m always surprised by how many people brag not on the college they graduated from but the college they dropped out of. So there are people who are finding other ways into the tech sector that don’t involve four years of college. I think everyone who wants to go to four years of college should. I did, plus three years of law school. But there are some people for whom that isn’t gonna be their path, and the bootcamps are an expression of that.

Our view is that if theres gonna be the bootcamp pathway it should be open to everybody, no matter what your race or gender, you should be able to access those bootcamps, finance that education, come out the other side, and get a job based on your skills and training. obviously the historically black colleges and universities need more support to offer even better computer science and engineering degrees, community colleges need support to get people into the STEM profession and trades, but these bootcamps also need to be bolstered and supported.

That’s not even about diversity, that’s about pure numbers. So you’ll see the community colleges step up, HBCU’s beginning to step up, I hope the tribal colleges begin to step up, and the bootcamps will step up. Our job is to help all those institutions find and finance top talent.

Check out more on tech, inclusion and expansion for minorities on the next page …