'EACH Woman Act' Introduced to Congress to Fund Abortion 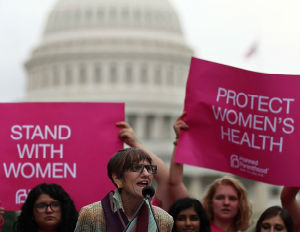 The Equal Access to Abortion Coverage in Health Insurance, also known as theÂ EACH Woman Act, was introduced to congress this Wednesday, July 8, 2015. The bill proposes abortion health coverage for every woman regardless of income, insurer or place of residence.

It’s main focus is dismantling the Hyde Amendment which, since 1976, has stipulated that Medicaid cannot pay for abortions. The coalition behind EACH Woman is called ALL Above All, and it includes heavy hitters like Planned Parenthood, National Black Women’s Reproductive Justice Agenda, The Center for Reproductive Rights, and the National Organization for Women and the Feminist Majority Foundation.

The following is from a press release by National Black Women’s Reproductive Justice Agenda:

When policymakers severely restrict Medicaid coverage for abortions, 1 in 4 poor women is forced to carry an unwanted pregnancy to term. The lasting implication is that a woman and her family, who were already struggling to make ends meet, become more enmeshed in poverty.

With unprecedented restrictions and bans across the country on a woman’s ability to get an abortion, the EACH Woman Act marks a long-needed change for women and their families by creating two important standards for reproductive health:

“It is not our place to decide for another woman whether she should have an abortion. None of us can know all her circumstances,â€ said Marcela Howell, founder and strategic director of the In Our Own Voice: National Black Women’s Reproductive Justice Agenda. “But it is vital that every woman can consider all the options available to her, however little she earns or however she is insured.â€

Some republicans argue that pro-choice democrat’s time and money may be better spent informingÂ women with unplanned pregnancies that abortion isn’t their only option. According to TowneHall.com, there are over 2,000 crisis pregnancy centers in the country that are more than willing to help mothers see their pregnancies through by providing essential resources and support.

5 Ways to Be the Mentee Every Mentor Wants

GlobalHue’s Kelli Coleman Talks Female Empowerment and Being a Boss