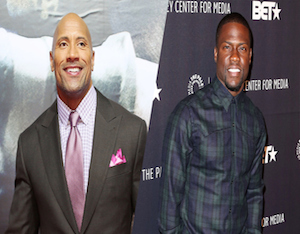 All hands on deck! It appears that the Hollywood box office is going to be taken over by a Rock-Hart collaboration.

According to Variety, New Line Cinema is placing its chips on Dwayne “The Rock” Johnson and Kevin Hart to star in a buddy action-comedy film called Central Intelligence. Directed by Rawson Marshall Thurber (We’re the Millers), the film finds the two box-office juggernauts as two former high school students who end up on opposite ends of life’s spectrum.

Johnson, 42, will play a bullied loser who becomes a contract killer for the CIA. Hart, 35, is his former high school sports star who becomes an accountant. The Rock contacts Hart to help foil a plot to sell classified military secrets and engage in hijinks galore. The film is produced by Scott Stuber’s Bluegrass Films banner; Ike Barinholtz and Dave Stassen wrote the original script with Sean Anders and John Morris handling re-writes.

Central Intelligence is to begin rolling cameras in the spring of 2015, with Johnson already on the books for two more Journey to the Center of the Earth sequels as well as playing Black Adam in Shazam, both for New Line. Meanwhile, Hart has just wrapped Ride Along 2 with Ice Cube and has the comedy The Wedding Ringer with Josh Gad and Get Hard inching toward release in 2015.

Anticipation is high for this project as both Johnson and Hart began teasing the team-up this weekend over their respective Instagram and Twitter pages.