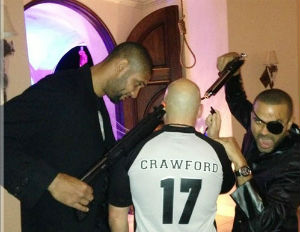 The San Antonio Spurs may be in more trouble with the NBA.

A few days after they were fined $250,000 for sitting their players abruptly against the Miami Heat in a nationally televised game, a photo circulating the Internet may get two of their star players in even deeper trouble.

A photo showing Tim Duncan and Tony Parker dressed in all black with guns for Halloween will ruffle the feathers of any commissioner. What’s even worse is that both of them are shown pointing the guns at a man dressed up as NBA official, Joey Crawford. There also appears to be a noose hanging in front of Crawford.

Crawford and the Spurs have a contentious history dating back to several years ago when the referee ejected Duncan from a game, while Duncan was sitting on the bench.

Now Is Perfect Time To Get Finances In Order

Get Your Mind Right: 5 Career-Boosting Quips From Zig Ziglar