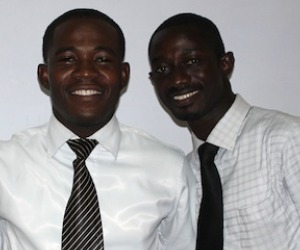 Dropifi, a startup tech company in Ghana has taken the top spot in the 2012 Startup Open, beating 49 other competitors from around the world, including Canada.

Dropifi is the result of an encounter that Dropifi’s team leader David Osei had while meeting a business executive.

“I requested his business card after a meeting and the piles of cards he had to wade through was enormous. He was looking for his card amongst othersâ€ he recounted. “In 2006 I conceptualized a mobile app that will help people to share, store and organize business cards better.â€

As the grand prize winners, Dropifi’s co-founder, David Osei, receives an all-expenses-paid trip to Rio de Janeiro to serve as an official delegate to one of the world’s largest startup community gatherings, the Global Entrepreneurship Congress in March 2013

When asked about the startup scene in Ghana, Osei said, “Africa is developing very fast and technological innovations will be the bedrock for these developments. Investors will not only be investing in a technology startup but also into the future economy of Africa. The next big technology corporations for the “new Africaâ€ are starting now. The Google, Apple, Microsoft and Facebook are being built now. This is the right time for investors to be part of a success story.â€

In its third year, the Startup Open competition was open to entrepreneurs who had a “startup momentâ€ between GEW 2011 and GEW 2012 (Nov. 22, 2011 to Nov. 18, 2012). A startup moment is anything that can be interpreted as the company is “open for business,â€ such as the business becoming incorporated, completing a first sale or securing outside funding.

A panel of judges selected the winners on the basis of concept, growth projections and knowledge of their industry. Nearly 400 applications from 56 countries were evaluated in the first round of judging which resulted in the GEW 50. The GEW 50 represents a range of industry sectors and 17 countries.

Is Thursday the New Black Friday?

Keep the Job, Even Without the Passion