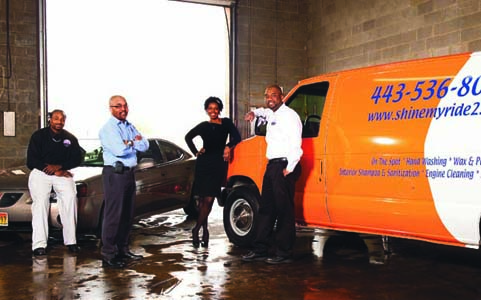 When Damon Gadson’s mobile auto-detailing business generated $35,000 in sales in a single day, he knew his venture was cruising down the right road. And while he still has hurdles to clear, this accomplishment gave him the confidence he needed to start driving toward expansion.

This sales surge sprouted in the spring of 2010, just two years after 35-year-old Gadson and his wife, Natasha, 34, rolled out Empire Auto Detailers (www.shinemyride.com). Empire specializes in custom auto detailing through its physical location and mobile detailing units equipped with generators, buffers, power washers, and water tanks so there’s never a need to use a client’s resources during off-site visits. The Gadsons invested an initial $15,000 of their personal funds in equipment, chemicals, uniforms, and vans.

Empire’s first physical location opened in July 2010. Its branch, Empire Auto Detailers Baltimore (www.shinemyride2.com), started as mobile-only units as well, and a physical location is scheduled to open in Abingdon, Maryland, this month. The Gadsons are now reaping the benefits of their endeavor, with a sizeable customer base and a host of corporate clients that include Geico, Lockheed Martin, and Choice Hotels. Empire’s corporate clients constitute nearly a third of the company’s business.

A big part of Empire’s growth spurt stemmed from Gadson’s decision to partner with LivingSocial (www.livingsocial.com), a website that offers discounted daily deals from businesses across the country. Through LivingSocial, Empire sold 702 deals in one day, saving customers about 60% off car detailing services. “We made more money in that one day than we did in our entire first year,â€ says Gadson.

It was a win-win situation for Empire since there was no up-front cost in collaborating with LivingSocial. The company only takes commission from deals sold. “This sort of agreement gives companies an infusion of customers they didn’t have before,â€ says Gadson, who notes that about 25% of Empire’s business comes from daily deals websites (including Groupon and BuyWithMe), with 20% of those patrons being repeat customers. Empire recoups some of its losses by offering add-ons or other special services to the original deal for an additional cost.

And despite hefty overhead costs that include rent, gas to visit off-site clients, biodegradable chemicals, and labor, the company broke even in 2009 and has since been operating in the black. After clearing the financial hurdle of breaking even and boasting profits, Gadson decided to expand Empire’s reach.

With the help of a corporate lawyer who has licensing experience, he created a licensing agreement to open the Baltimore branch in July 2010. As part of that agreement, the Gadsons’ licensee invested about $10,000 and in return received the full Empire Auto Detailers business plan, consultation, business leads and website, as well as ongoing training and support. The licensee made a separate investment in the equipment and supplies needed to run the business. The licensee also pays Gadson a percentage of revenues each month.

Next on Gadson’s agenda is moving Empire beyond licensing and into franchising, with Atlanta being the target for 2011. But his ultimate goal is to build a reputable, profitable brand strong enough to become a franchise, and attractive enough to sell in the next five to seven years. “In order to sell the business, we have to be a great business,â€ Gadson says, adding that he believes Empire is unlike any other auto detailer around. “We are trying to change the face of the detailing industry from the soap, bucket, and hose to arriving in uniforms and even coming on-site.â€