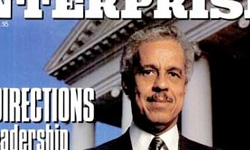 The editors of BE predicted L. Douglas Wilder would become the governor of Virginia and make history as the first African American elected to run a state in the history of American politics.

Serving during rough recessionary times, he was lauded for operating one of the nation’s best-managed states and, at the same time, became a source of inspiration for a number of black politicians who sought statewide and national office. Top Career Lies You Believe in Your 20s

What is the “Harlem Shake” Viral Dance Craze?