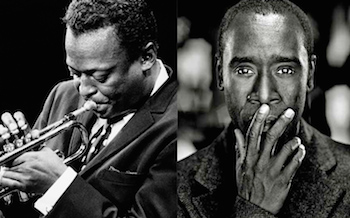 With a goal of raising $325,000 by July 6, actor Don Cheadle is hoping his fans and well-wishers will help to make a Miles Davis biopic a reality.

The “Iron Man 3” actor who has already announced plans to star and direct “Miles Ahead” has turned to Indiegogo to raise capital funds to produce his dream biopic project. Formerly titled “Kill the Trumpet Player,” Cheadle has a pretty strong ensemble cast, as Ewan McGregor is set to co-star as a journalist who helps Davis.

Unlike the recently released “All Is By My Side” picture, “Miles Ahead” has the support and blessings of the late musician’s family, as you’ll see in the video below:

For interested participants, prizes range from “exclusive updates” ($5) and T-shirts ($65), to a role as an extra ($8,000) to a co-producing credit ($12,500). There are some awesome goodies that should appeal to fans of Miles Davis, which are outlined in full on Cheadle’s Indiegogo site.

“Miles Ahead” is a non-traditional biopic in the way that it doesn’t cover Davis’ entire life, but rather just “a few dangerous days” in his life. Cheadle’s goal of $325,000 is pretty modest when compared to others who are asking for major bucks. Should Cheadle reach his figures, then the actor and newly minted director plans on shooting this summer.

Be sure to check out Don Cheadle’s page by clicking here.

The 5 Best Black Girls Code Apps You Should Know