Donâ€™t Wait for Superman ... Put On Your Own Cape! - Black Enterprise 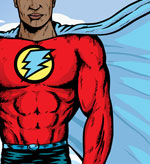 There’s good reason one of this year’s most talked about films has been Waiting for Superman, the powerful and poignant documentary about the state of America’s public schools. Among the film’s most gut-wrenching scenes: parents of different hues and from different zip codes participating in a series of lotteries so their children can attend first-class charter schools and leave regular public education behind. One parent, for instance, who wanted her child to attend Harlem Success Academy Charter School, was one of 767 applicants vying for 35 slots. Being a parent myself, I felt for the parents and children as I saw the anguish-ridden faces of those not selected. As director Davis Guggenheim stated in the film, too many parents have been forced to “pin hopes on a bouncing ball, placing our children and their future in the hands of luck.â€

Jonathan Spear, co-founder and COO of Generation Schools Network, a highly successful nonprofit bringing innovation to urban schools, and my good friend, recently said: “We can’t wait for Superman. Jimmy [Olsen] and Lois [Lane] can help solve this problem, too.â€ He’s right. We must all be fully committed to fixing our schools. In addition to placing the future of our children in jeopardy, American business competitiveness has been threatened; at a time when the national unemployment rate tops 9%, CEOs of high-tech industries say they can’t find enough qualified applicants on our shores to fill positions.

According to the Broad Foundation, American students ranked 25th in math and 21st in science out of 30 industrialized countries. News reports have disclosed that 10% of schools are “dropout factoriesâ€–institutions in which 60% of the freshman class fails to make it to graduation. Although American students of all races and both genders have underperformed, researchers found the overall graduation rate for black males at 47%.

I strongly believe we can reverse this trend, and it starts with across-the-board accountability. Educators have proved that poverty-stricken communities don’t produce failed schools; lack of commitment does. We must adhere to a standard in which teachers and school officials are expected to perform at the highest level. As in the business world, educators who receive high marks should be rewarded with merit pay while underperformers should be cast out. The notion that a teacher can simply belong to a union and receive tenure for life regardless of job performance is pure insanity. Imagine what the state of American industry would be if we had to keep all employees regardless of their ability to perform at a satisfactory level. Moreover, local school officials and school board members should only be eligible to serve if their own children are enrolled in or have graduated from that public school system. By doing so, I promise you that you’ll have engaged and innovative officials dedicated to solving problems from curriculum development to infrastructure repair.

Ultimately, you can’t have education reform without direct parental involvement. For far too long, too many parents have been absent from their children’s academic lives. We must do more than walk our kids to the end of the driveway to see them off each day, and then never entering their schools again until we appear on graduation day with digital cameras in hand. It’s up to us to make our children and their teachers accountable, clearly stating our expectations, monitoring their progress, and utilizing technology to improve communication. With each of our four children, all of whom attended public schools, my wife and I made an agreement with their teachers that as soon as they even remotely veered off course we would be contacted immediately so that together we could ensure their academic success.

We can no longer afford to stand by and watch our children’s development deteriorate. We must be the guardians of our nation’s public education system and consequently the future of our country. And once we make that commitment to take action, we may all be viewed as superheroes.