This Doctor is Fighting for Justice in Prostate Cancer Treatment 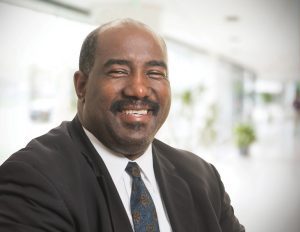 Dr. Willie Underwood III is not your average urologist. The doctor–named a “rising star” in urology by the American Urological Association Foundation–is a passionate advocate who uses his research and expertise to speak out about the racial disparities in the treatment of prostate cancer.

Dr. Underwood is an associate professor in the Department of Urology at the Roswell Park Cancer Institute in Buffalo, New York. There, he provides clinical care to prostate cancer patients and their families. He also serves in the Office of Cancer Health Disparities Research where his academic efforts focus on methods to improve the early detection and treatment of prostate cancer.

His research interests include factors influencing the racial treatment disparities in, and novel therapies for, prostate cancer. His research is funded by the National Institute of Health/National Cancer Institute. He has also received funding from the Robert Wood Johnson Foundation and the American Urological Association.

A recent paper authored by Underwood, entitled Racial/Ethnic Disparity in Treatment for Prostate Cancer: Does Cancer Severity Matter, and published in the journalÂ Urology, found that black and Hispanic men are less likely to get treatment for prostate cancer even when the disease is in an aggressive stage–something he stresses needs to change.

African American men are roughlyÂ 1.6 times more likelyÂ to develop prostate cancer than Caucasian men, according toÂ Harvard Medical School. TheÂ Centers for Disease Control and PreventionÂ states thatÂ prostate cancer is the fourth leading cause of deathÂ among black men over the age of 45.

BlackEnterprise.com caught up with Underwood to find out how the healthcare system can do better by men of color when treating this disease and how black men can sharpen their awareness of it.

BlackEnterprise.com: Why is this work so important to you?

Dr. Willie Underwood: When we look at the fact that black men are 2.5 times more likely to die from prostate cancer, this is the highest disparity in healthcare outcomes compared to all other diseases. Black men, in general, are less likely to receive treatment for prostate cancer–that should outrage all of us.

We first looked at this 12 years ago. We first published this in two other papers and 12 years later, I don’t see any progress. Black men continue to die, we continue to do nothing. At a certain point, we as a society have to demand some change.

BE: Why do you think this disparity is so prevalent?

BE: What are you hoping comes out of your recent research?

Underwood: What I want to see come out of this research is the following: First, outrage from providers, where providers ask, “Where are we going wrong?â€ Blacks and Hispanics are engaged in the healthcare system enough to show up and get a PSA (prostate-specific antigen) blood test screening and prostate biopsy, but somehow fall through the cracks when it comes time for treatment. The reasons [for theÂ disparity in treatment] are not biologic, socio-economics, nor a lack of access to healthcare.

Second, we need outrage from the communities where the community says “enough is enough;â€ it is time to fix this once and for all.

BE: What do you think is a good action plan to address this racial disparity?

Underwood: The idea that blacks do not receive equal treatment for equal disease is outrageous. We need to say it’s not about biology and genetics; it’s not that blacks don’t have access to healthcare providers or that black men don’t care about their health. Let’s stop blaming black people, saying it’s bad genes or bad behavior. Stop making up excuses; start to say what’s really going on and stop saying that black men don’t want to get treated. Let’s have dialogues about systemic problems and the justified lack of trust in the system. Let’s work together to work these problems out and create policies to make sure we have equal treatment for equal disease no matter race, gender, or socioeconomic status.

What are some external factors that could lead to prostate cancer that African American and Hispanic men should be aware of?

Underwood: Try to be as healthy as possible. The healthier you are, the better. Diet and exercise reduce stress. And if we’re able to interact with the healthcare system the way others do–get the appropriate preventive care, testing, and diagnosis of disease early, and receive appropriate treatment–then our outcomes would equal that of everyone else. Black and Hispanic men deserve longevity in life as everyone else. We deserve to see our grandchildren grow up.

BE: How early should African American men get screening for prostate cancer?

Underwood: 40 for a PSA screening and digital rectal exam.

BE: Do you know of any programs that help raise more awareness of this disease among African American men?

Underwood: IMPACT in California (a prostate cancer treatment program), the National African American Male Wellness Walk Initiative in nine cities, including Washington D.C., and the Cruisin’ for a Cure car show in September sponsored by MANUP of Buffalo in partnership with Roswell Park Cancer Institute (now in its sixth year).

Colleges Are Pushing Hard For This In A Trump Era

Eliminating Debt? Don’t Get Carried Away