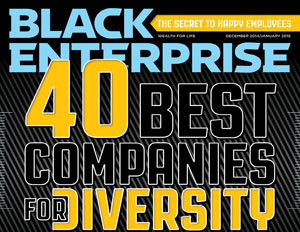 For far too long, much of corporate America has treated diversity as another exercise, disregarding its transformative power to change anachronistic organizations into vibrant enterprises. Whether it’s a football team, educational institution, or a major company, we all benefit when everyone–not just a select few–has access to a seat at the table and the opportunity to make a contribution.

Unfortunately, large numbers of major corporations persist, for the most part, in playing a counterproductive numbers game, checking the diversity box by placing an obligatory person of color in a high-profile position. These executives have devised what amounts to a quota system that ensures that corporate boardrooms, senior management teams, and prime supplier ranks remain predominantly white and male.

Such tokenism represents outmoded, divisive thinking. It’s nothing less than a diversion from meaningful corporate governance. At a time when African American executive talent is more abundant than ever, corporations should willingly embrace our inclusion to drive their performance.

There’s still much work to be done. African Americans remain underrepresented in senior management, constituting a mere 3.2% of such positions. As for suppliers, a 2010 congressional Corporate Diversity Report found that African American-owned businesses receive a minuscule 2.58% of total corporate procurement dollars.

Recent studies have clearly shown that diverse organizations are among the top corporate performers. However, a recent Academy of Management report found that, although senior executives won’t say anything negative about diversity, they often penalize African Americans with poor performance reviews when they engage in “diversity-valuing behaviorâ€–for instance, an African American advocating the advancement of another black executive. The report also revealed that if nonwhite executives downplay their race, “they may be viewed … as worthy of being promoted into the highest organizational echelons.â€

I find it shortsighted for corporate leaders not to fully embrace diversity, given demographic and economic trends. According to the latest U.S. Census Bureau projections, the cohort ages 18—29 will grow more diverse over the next several years. By 2028–in just 13 years–the Census Bureau reports that the 18—29 age group will be defined as “majority minority.â€ Ten years later–by 2038–the rest of the labor force will have gained that distinction.

African Americans will hold considerable consumer clout for decades to come as well. The Nielsen Co. reports that black buying power is projected to exceed $1 trillion in 2015, making African Americans a segment corporations can’t afford to ignore. It’s been proven that companies are more effective in penetrating such consumer markets if they regularly hire black employees, promote them to managerial positions, and target a significant portion of their procurement spend to African American suppliers and media.

In this issue, our eighth 40 Best Companies for Diversity list identifies corporations closest to practicing this principle. The companies featured on our roster exert a strong culture of inclusion, starting at the top with many of the CEOs presiding over internal inclusion councils and tying diversity best practices to job performance and compensation. And there’s much supporting evidence that these companies profit from their commitment to diversity–in innovation, leadership, and solid financial performance.

We, too, must play a role in making sure that these corporations don’t marginalize us. If we are responsible for delivering a company’s market share, we must demand reciprocity through African American representation among its workforce, senior executives, corporate directors, procurement dollars, media dollars, and community investment. If we hold influential positions, we must use our seats and voices to promote access to opportunities, as well as to support organizations that advocate on our behalf.

The strength of our nation is in its diversity. In order for America to fully realize its potential, African Americans must be an integral part of that equation–period.