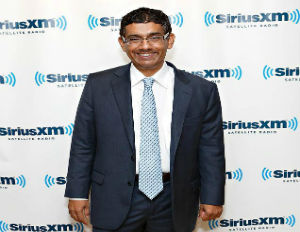 Dinesh D’Sousa, co-director of the popular anti-Obama film “2016: Obama’s America”Â  is being sued by a business partner.

The former policy adviser to Ronald Reagan is being sued by Douglas Sain who claims D’Sousa funneled profits from their movie into a new book project.

While a San Diego judge denied Sain’s request for an immediate restraining order, the case is going into arbitration.