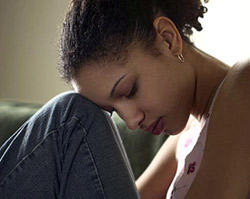 Like many of the estimated 19 million Americans suffering from some form of depression, Shanice Watson didn’t realize the crippling mental disorder had grabbed a hold of her until her world began falling apart. Once a six-figure corporate executive with an apartment in the heart of New York City, Watson has had to get by on mostly unemployment insurance since she found herself jobless in the wake of Wall Street’s collapse two years ago–her savings, IRA funds and other rainy-day accounts all but dried up.

Unable to continue paying rent on her nearly $2,000 a month one-bedroom apartment in midtown Manhattan, the 31-year-old now shares a place in Harlem with two roommates, something she has not done since her college days. “It’s been humbling,â€ she says.

Two weeks ago her boyfriend bowed out of their relationship, fractured, in part, by financial hardship. When he left, Watson couldn’t leave her bed–the latest hit in a domino effect of devastation that had become her life.

“There are days I don’t leave the house,â€ admits Watson, whose deep general malaise is compounded by Seasonal Affective Disorder, a type of depressionÂ that strikes her each year at the start of winter. She’s lost 10 pounds in the past year and a half and has started smoking again after kicking the habit for several months. She says she “drinks more than usualâ€ and rarely frequents her favorite nightspots. Relationships with her girls have become strained because they don’t understand why their normally confident, upbeat friend doesn’t seek the help of a therapist or take antidepressants to diffuse the funk. But Dr. Elisa English–a mental health professional with a private practice in New York City–does.

“First, there’s the obvious–if you’re unemployed it’s very likely you feel you don’t have the health insurance necessary to help pay for these services,â€ says English, who reports more than half of her clients are unemployed or otherwise struggling financially. “Then, there’s the less obvious: Black people tend to have a lot of fears around medication. [This is the] residual effect of devastating studies like the Tuskegee syphilis experiment, [a clinical study conducted on almost 400 unsuspecting Black men in Alabama to study the natural progression of the untreated STD]. We don’t trust White folks to medicate us unless it’s for something [tangible like] hypertension or diabetes, and many of us don’t trust White people, period–particularly around the issue of mental illness.â€