Deion Sanders Show for Oprah's OWN Slated for March Premiere 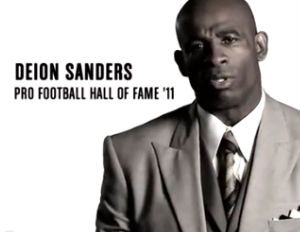 It’s Primetime on OWN.

Deion Sanders is a publicist’s dream: Famous, handsome, highly articulate and he sticks to the message. For OWN’s “Deion’s Family Playbookâ€ (March premiere), his credo is simple, “when I die I want people to know me not just for football and baseball, but as one of the best fathers who ever lived.â€ Sanders is raising 8 kids at home plus nearly 900 others through his school and academy. He never heard “I love youâ€ from his father or stepfather, so “I shower my kids with love,â€ he said. If you couple time “with love …we can all be successful parents,â€ Sanders added. His other kick is education.

Sanders told The Wrap he’s not doing it for the publicity.

“My kids are elated to be on TV,â€ he said. “But unlike other shows, we’re not using this to catapult ourselves. I’m happy with where I am.â€

Read more at The Wrap.

Get Right, Get Tight: 2014 Fitness Challenge