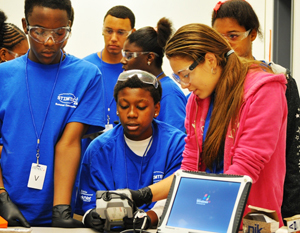 The U.S. Department of Defense recently awarded the STEMPREP Project at Southern Methodist University a $3.78 million grant to support its goal of increasing the number of minorities in STEM fields. The grant follows a $2.6 million grant in 2014. According to a report just released from the Executive Office of the President, 21% of Hispanic men and 28% of black men have a college degree by their late twenties, compared with nearly half of white men. The 2013 U.S. Census Bureau reports that African Americans make up 11% of the U.S. workforce but only 6% of STEM workers. Hispanics make up 15% of the U.S. workforce, but just 7% of the STEM workforce.

To create more diversity in STEM fields, the STEMPREP Project, based at the Annette Caldwell Simmons School of Education and Human Development at Southern Methodist University, recruits bright, science-oriented middle school students for the first phase of the 10-year program. For six weeks in the summer, 100 seventh- and eighth-grade minority students live on campus to study college-level biology, chemistry, statistics, and research writing and presentation classes, a laboratory techniques course, and a final in-depth research presentation on a disease. Each day begins with class at 8:30 a.m. and wraps up after study hall at 8:30 p.m.

Eighth-grader Walter Victor Rouse II wants to be a heart surgeon and professional basketball player to honor his grandfather, Loyola basketball standout Vic Rouse, who died from heart disease before Walter was born. Vic Rouse was an honor student at Loyola University in 1963 when his rebound and basket in overtime clinched the NCAA basketball championship for Loyola. The elder Rouse died in 1999 at age 56.

As a STEMPREP student, Walter is part of a program that boasts an impressive success rate–100% of students who finish the program attend college, and 83% go on to graduate school to become physicians, pharmacists, dentists, researchers, or engineers.