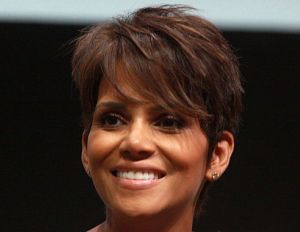 Halle Berry is one of the highest paid actresses in Hollywood, earning as much as $14 million per film. According to IMDB.com, she earned $10 million for 2007’s Perfect Stranger. She received a whopping $14 million for Catwoman, $6 million for Gothika (2003). Her work on the James Bond film Die Another Day (2002) nabbed her $4 million, and in 2001 she starred alongside John Travolta in Swordfish, and collected $2.5 million.

Along with her undeniable beauty, Halle Berry’s talent has taken her down a multifaceted career path. She is a former fashion model and the first African American woman to win an Oscar Award in a leading role for her performance in Monsters Ball (2001). She’s a spokesperson for Revlon Cosmetics. She’s played superheroes in X-Men and Catwoman, a drug-addicted girlfriend in Spike Lee’s critically acclaimed film, Jungle Fever and the wife of a convicted murderer in Monster’s Ball.

In 1998 Playboy magazine named her among the “100 Sexiest Women of the Century,” in 2008 she’s was listed as People magazine’s “50 Most Beautiful People in the World,” and in that same year she was named Esquire magazine’s “Sexiest Woman Alive.”

In 2009, Berry launched her first fragrance, Halle. According to Forbes, the sudden success of Halle by Halle Berry was seen as an anomaly in the challenged beauty market: In the first half of 2009, while fragrance sales fell by 8.7%, Halle by Halle Berry debuted as the best-selling fragrance at stores including Target, CVS, Walgreens and Kohl’s. On the heels of her latest venture, in October 2014, she launched an affordable intimate apparel line with Scandale Paris, an iconic French lingerie brand. Scandale Paris branded as the ultimate blend of luxury and functionality.

Like many mainstays in Hollywood–Berry’s personal life challenges have been highly publicized. She lost 80% of her hearing from domestic abuse. Her involvement in a hit-and-run accident exploded into a tabloid scandal and she’s been through two public divorces. But for a new mother at 47–she shows no signs of slowing down.

Beyond her entrepreneurial ventures, red carpet moments and power moves onscreen, Halle Berry’s remarkable career gives all women hope in the clichÃ©d statement: “Age is nothing but a number.â€

What’s your favorite Halle Berry onscreen moment? Leave me a comment below.

Is Your Small Business Protected from Cyber Attacks?