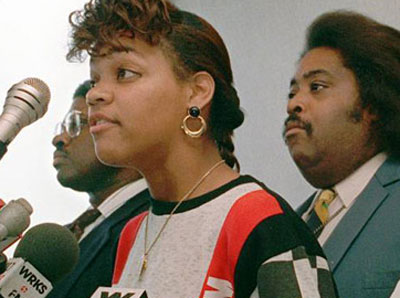 Tawana Brawley pictured with Al Sharpton in a 1988 photo.

Tawana Brawley, who was ordered to pay $185,000 for her role in a wrongful rape case that gripped the nation nearly 25 years ago, has reportedly not paid very much at all — and an apparent refusal to pay has caused that amount to reach a whopping $431,492.

Brawley garnered national media attention in 1987 when she accused six white men of rape. The case divided the entire nation but in October 1988, a grand jury decided that Brawley fabricated the entire story.

“Brawley, who now has a husband and a young child and is employed as a nurse in a nursing home, isn’t backing down,” MSN Money writes. “According to the Post, in a July 22 legal brief signed by Brawley and submitted by Maddox, Brawley refused to comply with the order of the New York court that handed down the defamation verdict because an appearance in the court, “which inferentially sympathizes with the Confederate States of America, would be contrary to the U.S. Constitution and would amount to a ‘badge of slavery.'”