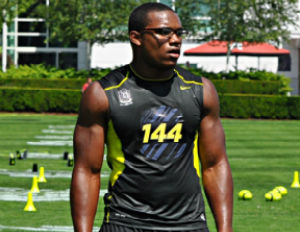 Da'Shawn Hand is expected to make his college decision on the NBC Sports Network.

Da’Shawn Hand, a 6-foot-4 254 lb., senior defensive end who is one of the nation’s most sought-after recruits will make his highly-anticipated college choice in front of an audience at Woodbridge High in Prince William County — and it will be carried on NBC Sports Network’s SportsDash.

Hand is said to be choosing from Alabama, Florida and Michigan.

Hand has been the subject of a video series by the Washington Post titled First and 17.

“The announcement will be among the final chapters in The Post’s weekly documentary video series ‘First and 17′, which has chronicled Hand’s senior season beginning in August. The series will continue through the end of the Vikings’ season.”

Watch as the experts from Rivals.com break down Hand’s game and Thursday’s forthcoming decision.

Your browser does not support iframes.