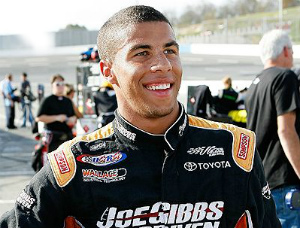 The other two black drivers to race in full-time series were Bill Lester and Wendell Scott, subject of the ESPN documentary, “Wendell Scott: A Racing Story.” Lester raced in the Truck series from 2002-2006.

It would appear Wallace Jr., a developmental driver for Joe Gibbs Racing, is (to use a racing term) on the fast track to the Sprint Cup, NASCAR’s top racing series. He became the first black driver to win a race, winning at Greenville-Pickens Speedway in South Carolina.

Wallace Jr. is a product of NASCAR’s Drive for Diversity program.

For his part, Wallace Jr. seemed unaware of the news, reported by multiple outlets Friday.

“Idk where all of its coming from but I’m sorry these post got your guys hopes up!” he wrote on his Twitter feed Thursday. “Haven’t gotten anything yet but were close I think!”

A source told ESPN.com that an announcement is expected to be made at the NASCAR Hall of Fame Saturday in Charlotte.

Mo’ Shade and No Tea: How to Slay the Rude Monster in Your Office