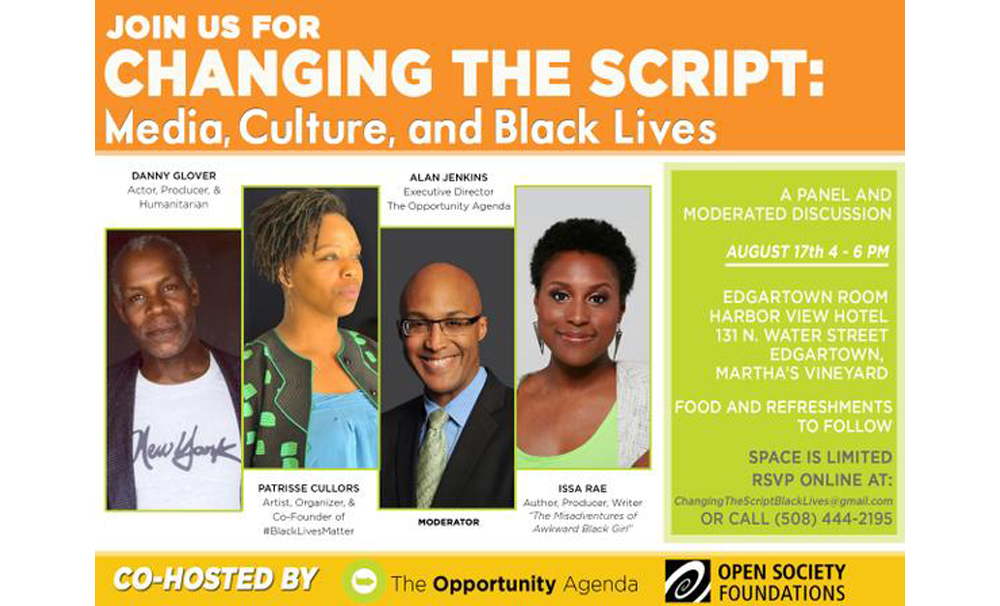 The panel, moderated by Alan Jenkins, provided an invaluable platform to discuss culture makers, activists, and their utilization of media and creative strategies to tell stories about black Americans.

In a BE exclusive, YouTube phenom Issa Rae expressed her desire to “talk about reclaiming the narrative of African Americans in the media, television and film,” as motivation for joining the panel. When asked about her own writing, Rae said she hopes to provide “an alternative depiction; a real depiction, showing that [African Americans] are capable of doing anything and being anything.” Social Activist Patrice Cullors said of the event, “I think it’s always important to talk about the way we’re treated; the narrative of blacks, how it’s being told and how we’re intervening.” Adding, “I wanted to hear from my co-panelists, as well as the audience, about what they’ve seen in the last couple years around the impact of The Black Lives Matter movement on exposing racist media images of black people or helping shift to a new narrative.”

BlackEnterprise.com spoke to Alan Jenkins, executive director of The Opportunity Agenda and organizer of the event, to discuss representations of African Americans in mainstream media, the impact of social media on black social justice movements, and differences between Black Lives Matter and the 1960s civil rights movement.

BlackEnterprise.com: Tell me about The Opportunity Agenda and the inspiration behind organizing this panel.

Jenkins: My organization— The Opportunity Agenda — is a social justice communication lab. We use communication and culture to build public support for greater or more equal opportunity. We’ve been around for about ten years. One of the things that we do at The Opportunity Agenda is study media and culture and how issues of race and identity and opportunity are depicted in different communities. Four years ago we did a study of media depictions of black men and boys. What we found is that there were some really persistent and harmful trends that depict a very warped picture of black folks in the media. We are, in the media, overly associated with criminality, with poverty; with intractable problems. The idea [of this panel] is to look at different perspectives, at the new era we’re in; an era of activism— Black Lives Matter—criminal justice reform, and many other issues of race and equality.

There is an absence of diversity in creative decision makers as it relates to the entertainment industry. Do you think increasing diversity behind the camera will result in the telling of more diverse stories?

What motivated your decision to include Danny Glover and Issa Rae as panelists?

Danny Glover has been, in many ways, fortunate—he’s tremendously talented—but there are a lot of talented people of color who don’t get to play the diverse and rich roles that he has gotten to play. Issa Rae has used the medium of YouTube and the Internet to get her story out; that’s a real change.

This is the first moment in human history, in which almost all of us have the ability to speak and tell stories to millions of people and hear back from them without mainstream media and gate keepers. Issa Rae, like Danny Glover, is a very talented story teller. She’s been innovative in finding new ways to tell her story; in the way she wants to tell it, through a medium that literally didn’t exist a decade ago. So, that was the idea behind bringing together this diverse panel, which of course includes Patrice Cullors who has used Twitter to [support] activism and concern about police killings of unarmed black men.

Is a ‘Straight Outta Compton’ Sequel In the Works?