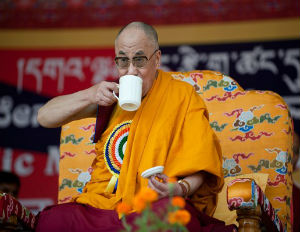 In an interview with ABC News, the Dalai Lama let Americans know that he was not here for our 2016 election shenanigans. When asked his thoughts on Trump, the Dalai Lama replied, “Oh that’s your business.”

[Related: Colin Powell: There’s a Level of Intolerance in Some Parts of the Republican Party]

“A serious discussion about policy matter is useful. But sometimes a little bit personal criticism, that looks a little bit cheap. That’s my view,â€ the Dalai Lama continued.

He did not explicitly refer to any of the candidates, instead focusing on the broader issue of how people allow politics to become divisive.

Although the revered spiritual leader remarked that he felt his inability to vote prohibited him from sharing his opinion on the matter, we couldn’t help but notice his continuous giggle throughout the segment.

We also couldn’t help but laugh with him.

How to Build A Team