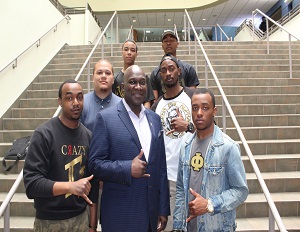 (Image: Jesse Tyson with students on an HBCU tour at Hampton University. Courtesy of NBMBAA)

January is National Mentoring Month, a campaign held every year to bring attention to the need for and the value of youth mentoring.

The other day, I spoke with Jesse Tyson, president and CEO of the National Black MBA Association, about the important role mentoring plays in the organization.

“It’s our goal to create an evergreen pipeline,â€ Tyson says, “and the beginning of that pipeline is high school students. One student out of every three grows up without a mentor.â€

“The NBMBAA works with young people to connect them with opportunities for personal growth as well as social and economic development,” Tyson says. “People who have mentors in their lives do better in school and make better life decisions. When we think about our future as a community, it makes sense for us to focus time, energy, and resources on mentoring.â€

Through its signature mentoring program, Leaders of Tomorrow, which begins with ninth-graders, the NBMBAA has mentored more than 8,000 students in its 20 years of existence; 95% of which have enrolled in college. The organization has provided more than $3.5 million in scholarship and program support, but it wants to go further.

“We’re launching our 2020 goal in May of this year, which calls for us to reach 100,000 mentor hours by providing one-on-one interactions and small group workshops, as well as some online and speed mentoring,â€ Tyson says.

“We encourage them to set goals and to focus on academic achievement,â€ Tyson says. “We also ask that they pay it forward; to help those behind them in their community the way we are helping them.â€

Tyson says that people stepped into his own life and invested in him. A global and marketing operations expert, who formerly worked for ExxonMobil, Tyson credits mentors for contributing to his success.

“Mentors inspired me to step up in areas I didn’t think I could,â€ Tyson says. “Showing the young that stepping outside their comfort zone is critical to their success is necessary,” he says, adding, “What’s important won’t be easy.â€

The LOT program begins in ninthÂ  grade. There are 33 NBMBAA chapters across the U.S. From HBCU college tours, to case competitions, and scholarship support, LOT and the NBMBAA have much to offer tomorrow’s business leaders.

You can go to the NBMBAA website to learn about a LOT program in your community.