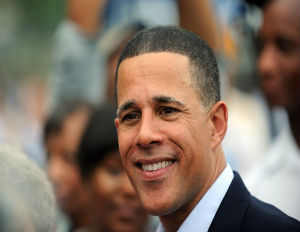 Lt. Gov. Anthony G. Brown has picked up a major endorsement in his bid to become Maryland’s next governor.

The Washington Post is now standing behind Brown, saying his priorities are the “right approach” for Maryland and hailed him as a “conscientious public servant with broad experience.”

Brown is in a three-way race in the democratic primary against Maryland Attorney General Douglas Gansler and Del. Heather Mizeur.

In supporting Brown, Washpo says, “Mr. Brown strikes us as the best candidate and the one most likely to improve what Democratic leaders concede is the state’s anemic track record in attracting and retaining jobs and employers.”

Justin Schall, manager for the Brown-Ulman campaign, welcomed the huge endorsement saying, “We’ve known all along that Anthony’s record of accomplishments and lifetime of service to our state and our country makes him the best choice to be our next Governor. But this is a crucial moment in spreading Anthony’s vision to build a better Maryland all across the state.”

The primary is slated for June 24.

The Washington Post writes that the winner of the June 24 Democratic Primary is likely to be the state’s next governor. That’s because Democrats enjoy at least a 2-to-1 advantage in voter registration in Maryland. That puts the eventual Republican nominee at a severe disadvantage.

If Brown wins, he’ll become the first black governor of the state of Maryland.

Power Women of the Diaspora: Celebrity Stylist Talks How She Expanded Brand Globally