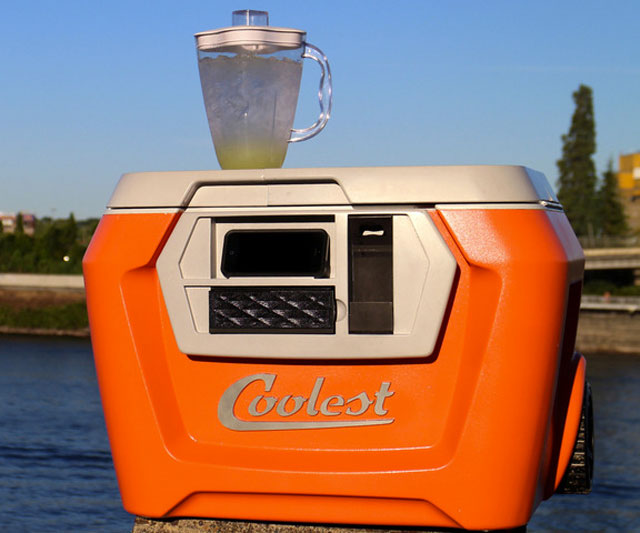 The Coolest Cooler is the new record holder as the top earner ever among Kickstarter campaigns, with more than 52,000 Kickstarter backers pledging more than $11 million. With one day left to go before its campaign ends, the Coolest Cooler has topped the previous record of $10.2 million held by the Pebble smartwatch.

A cooler isn’t necessarily something that people would associate with innovative technology. Regular coolers are boring, break easily and are a hassle to haul around just to carry the ice, as noted on the campaign web page. The Coolest Cooler is 60 quarts of AWESOME for cooling drinks plus it features a built-in ice crushing battery powered blender to whip up some margaritas or smoothies and waterproof Bluetooth speaker for listening to music. What else? Well, how about USB charger, LED lid light, cutting board, bottle opener, and extra storage space for plates and utensils.

Created by Ryan Grepper of Portland, Oregon, the Coolest Cooler has far surpassed its $50,000 goal. What’s worth noting is that this isn’t the Coolest’s first time on the Kickstarter block. Originally, Grepper began developing a similar model about 10 years ago. The inventor initially tried to fund the project on Kickstarter in 2013. But at that time, the project was only able to raise a little more than $102,000, falling short of its $125,000 goal.

The Coolest Cooler is expected to sell a retail price of $299 and is scheduled to be available in February 2015. Grepper is currently in the process of locking in a final design and securing a factory to produce the coolers.