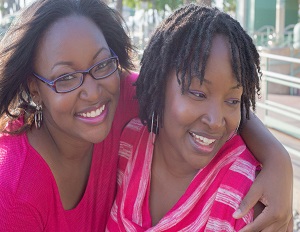 Recognizing their love for television and film at a young age, twin sisters JaNeika and JaSheika James knew early on they wanted to pursue careers in media. Both graduating from the University of Florida with a bachelor’s degree in telecommunications, the two sisters took two totally different career paths before merging back together and working side-by-side as staff writers for Fox’s hit show Empire.

For JaSheika, her entry into script writing came after completing ABC’s Talent Development Production Associate program in Burbank, California and working on several hit series including Desperate Housewives, Dexter and ABC’s Revenge. While JaSheika worked to gain footing in the world of television on the West Coast, JaNeika continued her education at Syracuse University and pursued a master’s of fine arts in television, radio and film. While there, she worked on a project tiled ‘The African American Female Influence in Television,’ and was afforded the opportunity to interview her longtime idol Yvette Lee Bowser. What started out as an interview of a lifetime eventually turned into a job as Bowser gave JaNeika an opportunity to work in the writer’s room for her UPN show Half & Half. Following a six year stint with Bowser, JaNeika went on to work at ABC Studios and later in script development at VH1 before enrolling in Fox’s Writing Intensive course with her sister.

[Related: ‘Empire’: Inside The Writer’s Room]

Now, serving as two of 14 staff writers for one of television’s highest-rated network shows, Empire, the James sisters pride themselves on bringing quality content and entertainment to audiences around the world.

JaSheika: No day is ever typical. That’s the crazy thing. I’ve been staffed on another show called Revenge, which was my first staffing job and by far Empire is the best staffing experience I’ve ever had and it’s because it’s so unconventional. For instance, a lot of the writers didn’t come from TV. The room is super diverse, not just racially diverse, but in terms of professional background. We have rappers, journalists, editors from Source magazine, novelists, etc. So what a typical day looks like for us, we will come into the room at 10 a.m. and we will just start touching up on notes or the things we discussed for a different episode. The thing that’s really cool is that we’re passionate about these characters and there is an overall arc that our show runner and executive producers want to see and areas we must check for the season, but for the most part it’s so fun because it’s like being able to day dream out loud. We talk about our ideas and our experiences and how we can support those ideas. We laugh, tell jokes and write.

Did your opportunity to work on Empire come about after being finalists in Fox’s Writing Intensive program?

JaNeika: Yes. I was working at VH1 last year in scripted development and I decided to apply for the Fox Writing Intensive. I reached out to our agent and he submitted both of us to the program, but JaSheika at the time had been working on Empire as a script coordinator, so she was already working on the show just not in a staff writer capacity. When we applied to the program, we got in and given that JaSheika had relationships with some people on the show we had a connection there.

Taking part in the program, one of the opportunities you get is to be able to interview for different Fox projects and [the network] offers an opportunity to be financially responsible for your first year on the show. So we had a blessing two fold.

[The program] was a great opportunity because it really prepared us for this opportunity. It was really great to get your ideas out there and really learn, and pitch and be able to put emphasis on other people’s ideas.

During college was there any one writer or producer you looked to and said he/she is a mentor in my head?

JaNeika: Absolutely. Not only was she a mentor in my head but she actually became my mentor. That woman is Yvette Lee Bowser.

I was in graduate school at Syracuse University and did a project on the African American female influence on television. I literally stalked her for about six months and her assistant was an excellent gate keeper. When I finally interviewed her for a project we were on the phone and you know how you just kind of have this instant connection with somebody. I ended up speaking to Yvette for about three hours. Fast forward to me graduating from Syracuse and I informed her that I needed an internship in order to complete my master’s program. I interviewed with her and my first job was working with her on Half & Half. Not only was I working as her assistant, but I was working in casting, I was working in costume, I was working on set, I was in the writer’s room, I was all over the entire production of Half & Half so I could see what all an executive producer has to do to run a series. So it was a great opportunity. I ended up working with her for six years and I was really raised as a writer by her.

I would say the biggest lesson I learned from her is writers write. Don’t say you’re a writer and don’t have anything to show for it. Regardless of whether you’re on a hit show, constantly be writing and creating your own ideas and feed that creative muscle.

Be sure to tune into the second season of Empire on Wednesday, Sept. 23 at 9/8c.

Anniversary of the Voting Rights Act: How the Legislation Impacts Young Minorities Today

Top 5 Places to Experience Before the Summer is Over