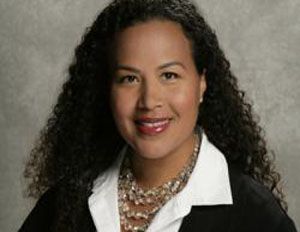 Making power moves that celebrate and bring together multiple ethnic cultures has long been a top priority for Tiffany Smith-Anoa’i, who joined CBS Entertainment as a publicist in 2000. After spending nearly a decade overseeing publicity strategies for primetime series, movies and specials, the Howard University graduate was appointed to her a newly created executive position as vice president of entertainment diversity and communications on the West Coast to build diversity efforts across the company.

THE GIG: Widely respected throughout the industry for her assiduous work ethic and winning personality, Smith-Anoa’i is deeply committed to identifying solutions that address the state of diversity within the industry. Â She is the force behind the network’s highly-lauded diversity workshop, CBS Diversity Discussion, which each year brings together the industry’s multicultural leadership under one roof for frank dialogue on inclusion and diversity with CBS executive producers/showrunners and CBS executives.

BlackEnterprise.com: Why is diversity important?

Smith-Anoa’i: As it relates to television, we are broadcasters and strive to reflect diversity on a whole: ethnic, gender, sexual orientation, age, physical ability and other ideologies which all exist in society for our viewers, both in front of the camera as well as behind.Â  Diversity is not just the right thing to do— it is an important and integral part of the business model that should be respected as such.Â  Diversity makes dollars and sense. One of my favorite motto’s is “Everything is better with Diversity sprinkled on top!â€

Despite the best efforts of many, why has diversity remained such a problem in Hollywood?

Diversity on a whole is a global issue that will continuously be a work in progress. It takes one person in a decision-making position to say, ‘Make it happen,’ whether that be within the realms of casting, writing, directing, development, etc. I challenge myself and others on a daily basis to find obvious and practical solutions to this specific problem. There has been progress, however, much more needs to be done and is being done day in and day out.

How important are African American executives in “curingâ€ the diversity problem in film and TV?

I change the dynamic of a room just by being there and not even saying a word. Having more diverse perspectives is always a combination for success. When you know better, you do better and it is important and invaluable to have a voice that can ultimately bring change and raise a level of awareness that was not there before.Â  It is pertinent to incorporate people of color at every phase of the process to insure a clear picture of Diversity is being painted.â€

What are your long term goals?

To continue walking the walk, talking the talk and providing a voice for progress, inclusion and change… When diversity becomes the norm and is no longer viewed as a thorn in the side, I will rest. Bottom line, everyone wants to feel acknowledged, included, respected and not invisible.

Dangerous Deferment: Are You Running From Your Goals?