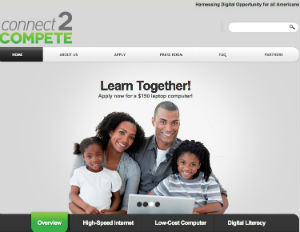 Connect2Compete, a non-profit group whose goal is to eliminate the digital divide in the United States, has introduced a campaign to thoseÂ who are not digitally literate find free training to obtain these skills, according to the NY Times.

The public service campaign through television and radio ads seeks to reach the digitally challenged withÂ messages that get at the relevance of the Internet. Ads on the radio feature actorsÂ portraying people who do not know how to use the Internet, such as a man named Peter, whose instructor shows him how to look for electrician jobs online. The voice-over says, “This is Peter. Recently he got help going on the Internet for the first time to look for a new job. In the past, Peter’s gotten work through people he knew. But he heard there were more jobs online.â€

One in three Americans (or 100 million people)Â still do not have broadband in their homes, with low-income Americans and minorities disproportionately on the wrong side of the digital divide. In addition, one in five American adults do not use the Internet.