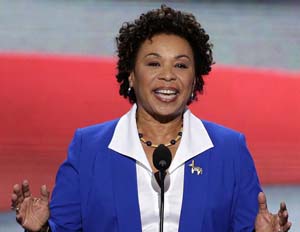 President Obama has nominated Congresswoman Barbara Lee to serve as a representative of the United States to the Seventieth United Nations General Assembly.

“I am deeply honored by this nomination,” she said in a statement. “I look forward to representing my Congressional colleagues at the United Nations and working to strengthen relations between parliamentarians around the globe. I’d like to personally thank President Obama for this nomination and Leader Pelosi for her support.”

She also indicated the importance of the role of the UN in the global community and its significance in efforts toward international peace and prosperity.

[Related: Sheryl Lee Ralph Spills the Secrets of Having a Long and Successful Career]

“Today, global tensions are nearing fever-pitch and the United Nations faces many challenges. I believe that now, more than ever, the United States must be fully engaged in the United Nations and within the larger international community as we work together to ensure a more just, peaceful and secure world,” she added. “As a Representative to the United Nations, my personal goal will be to foster stronger ties, deeper bonds and a renewed commitment to the UN’s vision of a better world for all.”

First elected in 1998 to represent California’s then-9th Congressional District (now the 13th), she now serves as Senior Democratic Whip. She was the chair of the Congressional Black Caucus and co-chair of the Progressive Caucus.Â In 2013, Lee became chair of the Whip’s Task Force on Poverty and Opportunity.

We know the blood, sweat and tears enacted the #VRA into law. That's why we're here. #JusticeSummer

.@NAACP @CornellWBrooks speaks on Lincoln Memorial addressing the crowd of the accomplishment of #JusticeSummer March pic.twitter.com/83VMAA6EMg

I joined @NAACP's America's Journey for Justice on the steps of the Lincoln Memorial today. #JusticeSummer pic.twitter.com/qSZmEDjYyY

How to Recognize and Survive Career Doldrums