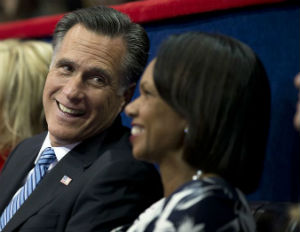 Former Secretary of State Condoleeza Rice told CBS News that the Romney campaign sent “mixed messages” to women and voters of color, which contributed to its poor showing in the presidential election.

“On the immigration issue, which turned out to be very important, and some issues about women too, some mixed messages were sent,” she said Friday on CBS’ “This Morning. “And when you send mixed messages through the narrow funnel that is the media spotlight sometimes people hear only one side of that message.”

“But when you look at the composition of the electorate, clearly we are losing important segments of that electorate and what we have to do is to appeal to those people not as identity groups but understanding that if you can get the identity issue out of the way then you can appeal on the broader issues that all Americans share concerns for.”

Rice also said that she wouldn’t be interested in succeeding Hillary Clinton as secretary of state, even if asked to do so personally by President Obama.

The Final Days of a Historic Bar LVâ€™s Twelve-22