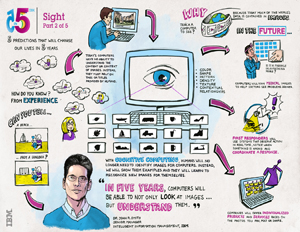 IBM released its annual “5 in 5â€ report on Monday, highlighting what’s next in computer technology. The new report from IBM claims that by 2018 computers will have the power to hear, smell, taste, see and touch.

Computers will come equipped with advanced technology that IBM says will not only revolutionize the tech industry, but also the healthcare, retail and agriculture industries. The pioneer in information technology plans to create applications that allow for faster, easier detection and differentiation of healthy and diseased tissues in hospitals; identification and interpretation of images without tags, recognizing their textures and colors, as well as “a way to compute ‘perfect’ meals using an algorithmic recipe of favorite flavors and optimal nutrition.â€

Researchers at IBM are also planning to allow smartphone displays to mimic the feel of fabrics to assist retailers when they’re perusing through boutiques and shopping malls. And the next time you’re flipping through a catalog, you can actually get an idea what that cashmere sweater feels like.

In the future, computers will rely less on human programming and instead will begin thinking more like humans. This may sound a bit eerie but “in the era of cognitive systems, humans and machines will collaborate to produce better results—each bringing their own superior skills to the partnership. The machines will be more rational and analytic. We’ll provide the judgment, empathy, moral compass and creativity,â€ says Bernard Meyerson, chief innovation officer at IBM.

Check out IBM’s video on the future of cognitive computing below: