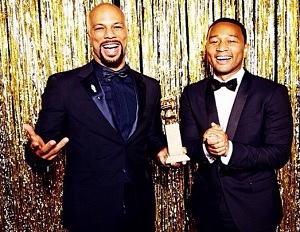 As the first black female director to be nominated for a Golden Globe, hopes were high for DuVernay to take home the win. Instead, DuVernay lost in the best director and best drama category to Richard Linklater’s Boyhood, and Selma star David Oyelowo lost for best actor in a drama to Eddie Redmayne from The Theory of Everything.

But in a positive turn of the night, Selma star Common and music genius John Legend took home the best original song award for their collaborative hit Glory. In a moving speech that summed up the timeliness and importance of the Martin Luther King, Jr. inspired film, Common touched on the current events of today and the impact that Selma has on the humanity of Americans.

RELATED: [REVIEW] Ava DuVernay’s ‘Selma’ Is Timely, Engaging And A Must See

“The first day I stepped on the set of Selma, I began to feel like this was bigger a movie. As I got to know the people of the Civil Rights Movement, I realized, I am the hopeful black woman who was denied her right to vote,” said Common. “I am the caring white supporter, killed on the front lines of freedom. I am the unarmed black kid, who maybe needed a helping hand, but instead was given a bullet. I am the two fallen police officers murdered in the line of duty. Selma has awakened my humanity, and I thank you Ava.”

Watch the video below of Common and John Legend’s speech and also check out a few Twitter reactions to Selma’s Golden Globes night.

Disappointed that #SelmatheMovie won one award for best original song. The film offered much more than a powerful soundtrack. #GoldenGlobes

Trophies are nice but Selma was made for the movement to win. To honor the past, motivate the present, teach our future & champion the cause

Oh Selma. My heart. We all know that you are the best movie.