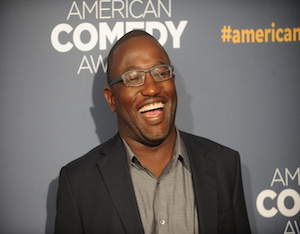 Funny man Hannibal Buress commands a stage whenever his presence is felt from state to state. The Eric AndrÃ© Show co-star found his headlining Comedy Camisado tour in Philadelphia last Thursday, October 16, during which he recounted Bill Cosby’s alleged history as a sexual predator.

An attendee on hand recorded Buress’ comedic claims, as the 31-year-old performer called Cosby a “hypocrite” for doling out family-oriented advice amidst numerous allegations of rape made against The Cosby Show star from the 1970s to 2000s.

“Thirteen?” Buress bristly said, alluding to the number of women who have come forward to allege sexual abuse by the star. “And it’s even worse because Bill Cosby has the f—–g smuggest old black man public persona that I hate. Pull your pants up, black people. I was on TV in the ’80s. I can talk down to you because I had a successful sitcom.”

Buress then directed his comedic barbs at the legendary comedian directly, saying, “Yeah, but you raped women, Bill Cosby. So, brings you down a couple notches.” “I don’t curse on stage. Well, yeah, you’re a rapist, so, I’ll take you sayin’ lots of moth——ers on Bill Cosby: Himself if you weren’t rapist,” Buress said.

The risquÃ© comedian wanted to “just at least make it weird” for anyone who loved Bill Cosby to watch The Cosby Show reruns. While Hannibal was reassuring the masses that he wasn’t making it up, he urged the crowd in attendance to Google the words “Bill Cosby” and “rape,” saying it would come up with “more results than Hannibal Buress.”

The jokester’s rant does sound different than the praises he lauded in Cosby’s direction back in 2013. In a May issue of GQ, Buress said of Bill Cosby’s humor, “There’ve been times when I’ve had to work clean where I take the f—s out of a joke and see if the joke still holds up. That’s a good exercise to make sure people are laughing at the actual content and not at the profanity. It definitely is tough to work clean. If I had to do an hour clean now, I don’t know how I’d pull it off.”

You can watch a brief video of Hannibal Buress performing the joke below:

Most Consumers Fear Running out of Money