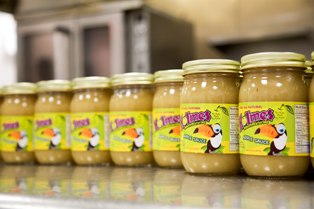 Holmes Mouthwatering Applesauce is still in the early stages of generating revenue. The product comes in a 16 ounce jar and sells for $4.99. Last year, the business grossed around $8,000 in sales from about 1,500 to 2,000 jars sold. “This year we are on target to sell over 2,000 jars a month,â€ notes Holmes.

The college junior recently was granted a $10,000 loan, with the help of the Samuel Adams Brewing the American Dream program, to grow and scale the company to meet demand and fulfill orders. “It is a five-year, low-interest rate loan,â€ adds Holmes. In partnership with the non-profit microlender, Accion, Samuel Adams Brewing the American Dream provides access to capital and coaching to small food, beverage, and hospitality businesses nationwide.

Holmes was inspired to start his own business when he was 15, after his godmother gave him the book “Reallionaire: Nine Steps to Becoming Rich from the Inside Outâ€ by Farrah Gray. “He was making a million dollars at 14. So, I figured I’m 15, I can go get that,â€ Holmes recalls.

The enterprising teen first came up with the idea to develop a chocolate candy bar called NomNom that he tried to sell in the cafeteria at his high school. “That was a failure. People weren’t interested,â€ says Holmes. Then came his ah-ha moment. “I realized that this is an era where we need something healthy. We needed a high quality product with a story. So, I came up with the idea for applesauce.â€

He had his grandfather show him how to make applesauce. But Holmes didn’t like the taste. So, used the technique his grandfather taught him and experimented with recipes of his own for about six months to a year. He created an all natural applesauce by adding cider, fresh pears, and fresh apples–and the occasional cinnamon. “The plan was to make a product that was made up of healthy, local and all-natural ingredients,â€ he explains, noting that better-known brands of applesauce are loaded with added sugar.

To start the business, Holmes spent about $1,500, mostly from his birthday and Christmas money. He even recounts a funny story about a friend asking him what he got for Christmas. He replied “apples.â€ Â His friend then wondered, “like the iPod.â€Â  To which Holmes grinned, “No, like the fruit.â€

Holmes raised his first real seed money to grow the business last summer when he launched an IndieGoGo Crowdfunding campaign. He requested $1,500 in 31 days and ending up getting a little over $2,400, with a single individual donating $1,000. Â Crowdfunding also resulted in establishing over 100 pre-orders of the sauce across the United States.

In addition, Holmes is now bottling his applesauce at a state-of-the-art space in the Cleveland Culinary Launch & Kitchen, a commercial kitchen incubator space that educates entrepreneurs and offers space at an affordable rate. Â He did his first batch run out f the kitchen last August. That experience prepared his team for future production runs. Holmes relies on local student volunteers to help him jar the applesauce.

Armed with a business plan, Holmes says he is looking to raise $100,000 in order to be able to expand into more markets and offer different product options. What’s more, he has been building the brand through social media, giveaways, demo/events and word of mouth.