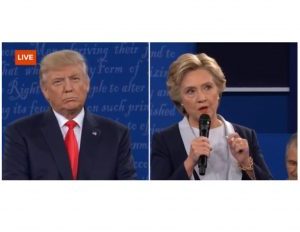 The second presidential debate between Hillary Clinton and Donald Trump should have been rated TV-MA for mature audiences only with parental discretion advised. Sadly, I, for one, did not allow my politically aware and oh-so-curious 8-year-old to view the event. While much of the country braced itself for what was to come, none of us could have predicted the depths to which the questions and commentary would sink.

The issue is also not so much what was said at the debate, but what wasn’t said as well. An inordinate amount of time was spent on Trump’s sexual infidelities and a few perfunctory topics such as healthcare, Syria and the Islamic State group were discussed in thin detail. However, there was no mention of social justice issues or criminal justice reform. This, in the city of St. Louis where just a few miles away the latest chapter in the civil rights movement began with the police shooting of a young black man in Ferguson.

Donald Trump is clearly unfit to serve as president of the United States or as commander-in-chief. He proved it once again by bringing forward women whose cases have been prosecuted decades ago. Even former federal special prosecutor Ken Starr has said that if he had it to do over again, he would not have sought to impeach President Clinton for his actions. Two wrongs certainly don’t make a right, and the sewer in which we find our current politics is disheartening and embarrassing.

The twisted irony of the latest Trump storm is that his words uttered in bravado concerning what is indeed sexual assault 11 years ago should be offensive to us, but no more offensive than what Trump continues to say today about five black men who were completely exonerated for sex crimes they didn’t commit.

Trump, who took out ads in the New York Times against the Central Park Five at the time of the incident, insists today that despite DNA evidence to the contrary, these men are guilty. This is one more topic that should have been aired last night but didn’t gain the attention it deserved.

As a nation, we find the tone of our politics in a zone 180 degrees different from this time eight years ago. In October 2008, the nation was on the verge of an economic meltdown. While Republican nominee U.S. Sen. John McCain acted irrational and uncertain, U.S. Sen. Barack Obama showed us his mettle and displayed his cool and calm demeanor in the face of a storm.

As first lady Michelle Obama has said, running for president or serving in that office often reveals the type of person you really are. In that moment, we saw that Barack Obama has what it takes to serve as the leader of the free world.

Fast forward eight years, and we have the exact opposite tone from Donald Trump. What we heard on that tape and those interviews on Howard Stern, and the disparaging rhetoric he has used throughout this campaignÂ has revealed who he really is to the nation. Trump’s ongoing prosecution of the Central Park Five and further denigration of people not like him, also gives us insight into who would get ahead and who would be left behind if he is elected president.

For all of the right reasons, Hillary Clinton is the clear choice to become the 45th president of the United States. Hopefully, our children will be able to actually watch TV–and history being made–on Jan. 20, 2017.

Corey Ealons is a partner with VOX Global, a public affairs communications firm based in Washington, DC, and a former White House spokesperson for President Barack Obama. Follow him on Twitter: @CoreyEalons and LinkedIn.