With Clinton endorsement, Obama battles to preserve his legacy 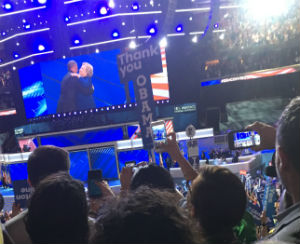 The image of President Barack Obama embracing Hillary Clinton at the Democratic National Convention will become iconic–especially if the presidential nominee becomes an occupant of the White House come January 20, 2017. Cheers and chants filled the Wells Fargo Arena, as Obama passed the baton with a rousing endorsement.

Gearing up for a brutal campaign this fall, Obama will be fighting to make history in electing the first woman president, but also preserving his legacy, which includes nation-changing healthcare and financial reforms. He knows all too well that a Trump presidency will unravel his policies in what the GOP refer to as “Obama’s third term.”

He told the cheering crowd, “We put policies in place to help students with loans; protect consumers from fraud; cut veteran homelessness in half…I’m here to tell you, yes, we’ve still got more work to do.”

Obama’s goal with the speech–and future oratory on the hustings–will be to stress that Hillary deserves to be the heir to his agenda due to her experience, savvy, and capabilities; “I can say, with confidence, there has never been a man or woman–not me, not Bill (Clinton)–more qualified to serve as President of the United States.”

By citing such qualities as her tenacity as an opponent in 2008, dutiful loyalist as his Secretary of State, and career-long advocate of social issues, Obama has attempted to diminish any distrust or ambivalence; a nagging negative in the Clinton Campaign. His shout-out to the Bernie Sanders wing of the Democratic Party was his way of trying to heal the breech and communicate that they were fully aware of that voting bloc’s influence and sway in the general election. He also knows that Clinton needs the Obama coalition of African Americans, Latinos, women, LGBTQ, and young voters that delivered him two victories, to gain any possibility of winning–and Hillary knows, too.

In making his case, the upbeat, hope-filled President, of course, used the speech as an opportunity to attack Trump’s character and his dystopia vision of American that only he could fix. Obama gained assist from, among others,Vice President Joe Biden, Vice Presidential hopeful Tim Kaine, and former New York Mayor Michael Bloomberg (“I’m a New Yorker…I know a con when I see one.”) At a session on gun violence, Rep. James Clyburn, another convention speaker, compared the permissiveness of Trump’s “hate-filled rhetoric” to the rise of Adolf Hitler, when the Nazi Party leader was elected Chancellor of Germany in 1932.

When Obama continued the deconstruction of Trump in his speech, the DNC delegates and supporters engaged in a chorus of hisses and boos aimed at the GOP contender. On cue, the President responded, “Don’t boo, vote.”

Obama realizes getting as many solid supporters to the polls as possible is the only way to ensure victory in November, as well as gain the opportunity to continue to see the impact of his presidency in private life.

The Key to Running a Business as a New Parent