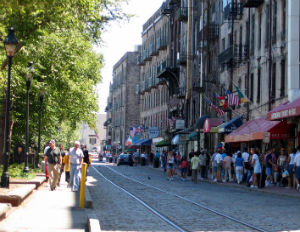 It’s no surprise that Savannah is a food lover’s dream. The South is typically known for its low-country cuisine and barbecue delights, and Savannah sits at the center of it all. Over the past few years, Savannah’s culinary scene has exploded, offering something old, something new, and a little bit of something for everyone.

With so many options, it can be a little overwhelming to choose the best eats that the city has to offer. We’ve compiled an insider’s guide to get you started on your culinary journey:

Nothing says barbecue like Wiley’s. The quaint, recently expanded restaurant has a Southern charm that you feel from the moment you walk in the door. Owners Wiley and Janet McCrary personally greet you at your table and the wait-staff offers impeccable service. From the friendly atmosphere to the Southern staples and impeccable, award-winning barbecue, Wiley’s is the star in Savannah’s barbecue crown.

One of Savannah’s most popular restaurants serves authentic Southern cuisine in a sophisticated 18th-century Georgian mansion. Just about everything on the menu is spectacular, so the hardest part of the evening will be deciding on what you’ll actually eat. You’ll find typical dishes such as shrimp and grits, fried green tomatoes, and barbecue-glazed duck, as well as other favorites such as a blackened oyster appetizer with watermelon relish and green tomato chow chow. The restaurant’s portrait-lined walls, fireplaces, and shimmering chandeliers add to the charm, making the Olde Pink House one of the best places to savor a delicious meal in true Southern comfort.

Fit for a president (President Barack Obama, in fact), Mrs. Wilkes is known for serving up the best Southern food. Why? Because it brings you back to your grandma’s kitchen, with family-style meals that include fried chicken and stewed okra. It is family-owned and operated since 1943.

Though not exactly in Savannah, Tybee Beach is “Savannah adjacent.â€ If you’re looking for some delicious and mouthwatering seafood right on the water, while taking in scenic views of the area’s waterways, then the Crab Shack is the perfect choice. A casual restaurant with ample indoor and outdoor seating, the Crab Shack is a seafood lover’s paradise, offering heaping platters of boiled shrimp, buckets of oysters and every type of crab imaginable. One of the most popular menu items is the low country boil, a feast featuring shrimp, corn, sausage and potatoes.

In a former Jim Crow—eraÂ Greyhound bus depot in Savannah, the Grey melds history and a modern take on Southern food. At the helm is chef Mashama Bailey, who was inspired by her grandmother’s Southern cooking, which she experienced as a young girl in Savannah. After working under Gabrielle Hamilton at Prune in New York City, she moved to oversee the menu at the Grey and the rest has been history, literally. Look for Southern staples such as pork shank with “a mess of greens” and cornbread and roasted chicken with jus and chow chow. Some menu twists include braised eel with cabbage, tomato, and onion and country pasta with pork belly, Parmesan, and black pepper.

Putt Guttz is a new breakfast and lunch spot on MLK Jr. Blvd. in downtown Savannah, serving up a Southern-inspired soul food menu. It’s billed as “Specialty Desserts and Deli,â€ and once you walk in you’ll understand why. If you’re looking for casual, informal dining, a friendly staff, and great Southern food, then Putt Guttz should definitely be on your radar. A newcomer on the Savannah block, it’s giving other restaurants a run for their money.