Texas Church Sign: 'Vote For the Mormon, Not the Muslim!' 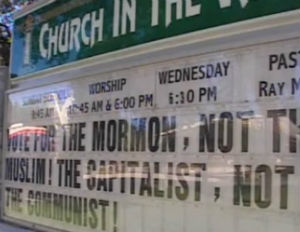 A sign outside of a church in Leakey, Texas, a tiny town of fewer than 400 people, is urging congregants to vote for Mitt Romney instead of President Obama.

“Vote for the Mormon, not the Muslim! The capitalist, not the communist!â€ the sign reads. Gawker reports that the sign was the idea of the church’s pastor, Ray Miller.

There are rules governing how church leaders can say about politics and still maintain their tax-exempt statuses.