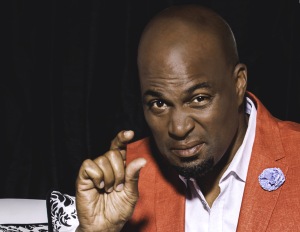 Comedy is a field where many people come and go, crash and burn, rise and fall. Amidst all that, you do get people who manage to steer clear of the pitfalls and maintain a steady career.

One such person is Chris Spencer, longtime comedian, still in the game, no known deficiencies. He was the first host of VIBE Magazine’s late night talk show, named “VIBE.” You may have seen him in a movie or two or maybe 10. He’s been featured in several TV shows. You may have even seen him on stage around the country, caught him telling jokes on his own comedy specials. But, I bet you didn’t know that he is partly responsible for the BET hit show, The Real Househusbands of Hollywood!

BlackEnterprise.com caught up with Spencer and tells us why he became a comedian, how The Real Househusbands of Hollywood got started, and what he has planned for the future.

BlackEnterprise.com: You’ve been “industry-tested” as you’ve been around for a number of years; what gives you the strength to continue working?

When did you decide that being a comedian would be a good career choice for you?

I was always the class clown but didn’t know stand-up would be my calling until my junior year in college. I was at UCLA talking with a group of students about our futures. We went around the circle [sharing what we planned to do] and the guy before me said he was gonna be a comedian and all of the women went bananas. They went on about how much they love to laugh and how much they love comedians. So when it came around to me, I too said comedian. Thank God he spoke first because I was gonna say dentist.

A lot of people don’t realize you’re the creator and executive producer of Real Husbands of Hollywood. Outside of the obvious reference to the Real Housewives series, what were you thinking when you decided to go forward with this project? Did the show meet or exceed any expectations you had?

I was the head writer for the BET Awards and Kevin Hart was hosting. He and I both knew we wanted to do something different and unheard of so that he could stand out. We both laughed about how our women loved those housewife shows and we pretended how much we hated them, but really didn’t. We noticed how men acted just as catty and trifling as those women and thought it would be funny if we did a sketch on the awards show depicting men doing so. We wrote it, called up our friends and did it. The sketch was received so well, BET immediately decided it needed to be a TV show. It has definitely met my expectations and beyond.

Some people may remember you from your stand-up days and I know you’ve recently done it for TV. Do you still tour or are there any plans to tour extensively? Do you even want to tour?

I still do dates, but my schedule from all of the writing I’ve been doing doesn’t permit me to do as much. I definitely want to tour again.

Since you’ve produced shows, appeared on stage, written for other comedians and basically run the gamut when it comes to comedy, if you could only do one thing, what would it be and why?

Stand-up, because when I’m being a comedian, I’m also being a writer, a producer and a director of a live show every time I’m on the stage.

You’ve even written a book, 150 Ways To Tell If You’re Ghetto; what spurred you to write a book?

I was on tour with Jeff Foxworthy and he had great success from writing the books, You Know You’re a Redneck If. One day, while reading through one of his many books, I realized that there are definitely many similarities with my people and that I should write a book poking fun at them.

You are hosting at The African American Festival taking place in Baltimore the weekend of June 21st and 22nd; how did you become involved in this?

The producers, greiBO (Sharon Page and Shelonda Stokes), of the festival approached me at the Black Enterprise Golf and Tennis Challenge weekend in 2013.

I don’t separate it. They are one in the same.

When it comes to the business aspect of your career, do you have a credo you live by?

Work hard or go back and live with your momma.

What else is in the works for Chris Spencer? What can we look forward to?

Season three of RHOH will air in October. We are also writing Season four of RHOH. I have a movie with Universal Pictures involving Kevin Hart and Lebron James playing brothers called Ballers. I also have a TV deal with Jamie Foxx and Lionsgate about the life and times of a troubled superstar.

Know The Real Cost Of Asking For Money