SNL: Chris Rock and Prince to Perform in November 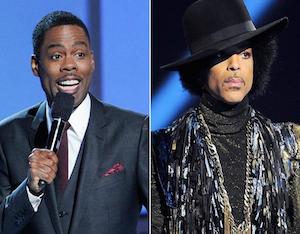 Once Lorne Michaels’ Saturday Night Live returns from its hiatus, it will be graced by two juggernauts of stage and sound.

According to reports , the longest running sketch comedy show will feature former alumni, Chris Rock, as host of the Nov. 1 show. And the musical guest for the evening will be Prince, whose presence is a big deal for the show and network.

With Prince having recently released two new albums, PlectrumElectrum and Art OfficIal Age, and Rock’s movie Top Five set for a December release, it seems perfect timing to have these two legends on board for another season of Saturday Night Live.

To measure just how long it has been since either titan has been seen on Saturday Night Live stage, consider this: Rock was only a cast member for three seasons (1990-1993) and hosted once in 1996. Prince served as a musical guest back in 1981 and 2006, making it 25 years between his first and second appearances.

With Purple Rain celebrating 30 years as a cultural identifier, Prince’s arrival may be the only chance that a new generation gets to see such an act perform. His latest albums both went number one as Art Official Age placed atop Billboard’s R&B chart and PlectrumElectrum, recorded with his new band 3RDEYEGIRL, entered at the height of Billboard’s Rock chart.

Soon HBO Will Let You Stream Without Cable