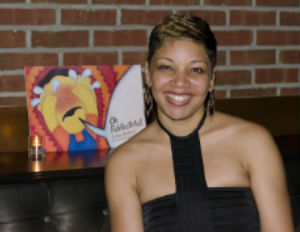 In a world where phrases like “mental healthâ€ and “behavioral disorderâ€ strike extreme paranoia and an unconscious fear among the black community, there are those who choose to block out communal chatter, realizing the need to face said issues.

A few years ago, author and single mother Tanji Dewberry saw her son Evan’s tantrums and boyish ways as more than just the routine terrible two’s. As many told her that her son’s actions would pass, she decided to close her ears to the world and focus on what was best for her and her son after he was asked to leave his daycare because of a biting problem. Recognizing enough was enough, Dewberry chose to get her son tested and become educated in the realms of mental health and behavioral disorders. Tanji soon found her son diagnosed with ADHD (Attention Deficit Hyperactivity Disorder). But while the emotional strain of ADHD on a child is one thing, the toll it takes on a parent is another.

“I don’t want to sugarcoat the fact that I was going through a very tough emotional time,â€ says Tanji, who unknowingly found herself writing a children’s book about the emotional stress of mental health while sitting under a salon hairdryer.

By the time she finished sharing her feelings with a pen and piece of paper, Dewberry wrote what is now titled Oh Fiddlesticks!, a book “to help children deal with negative emotions such as anger, frustration and confusion.”

As Tanji is now a Wall Street investor relations expert by day and author by night, finding ways to help other families harness the realities of mental health, Black Enterprise explores Dewberry’s insight to coping with mental health.

Black Enterprise: You’re a single mom working on Wall Street. When did you have time to discover your passion for writing?

Tanji Dewberry: I think it came out of a necessity. The hustle and bustle of Wall Street can be very demanding, and then you add…the challenges of having a special needs kid [and] it was almost imperative that I find some sort of outlet that spoke to the more creative side of me. And it was something that I enjoyed.

BE: When did you decide to manifest your writing into a book?

T: I started writing in December 2011, and the first draft, believe it or not, I did under the hair dryer at the hair salon. And I just kept writing. I thought other people would benefit from understanding and hearing my story, and the coping skills I had learned. I also thought it was important for people out there to not feel like they were alone in their struggles. I often felt isolated in that no one really understood what it was like having a child with special needs. So that was really where the passion to do it came from.

BE: You wrote the book to help others and yourself learn how to handle children with special needs. When did you realize your son had special needs and wasn’t just “being a boy?â€

T: I knew in my gut very early on when Evan was about two-and-a-half, close to three, that there was something just a little different about my kid. His tantrums were more excessive than I thought were normal. I didn’t have anything to compare it to, but I just felt in my gut, something’s not right here. When he started in his first daycare he had a biting problem. Very impulsive and we worked with him from September of I think that was 2008 up until 2009 or April 2010 on his issues. Then finally the school said, as much as we love him…he’s a great kid, but he’s a liability. So we were asked to not bring him back. That was the wakeup call that we had to do something different.

BE: While this wasn’t the case for you, when it comes to behavioral issues, why do you think so many people in the black community are hesitant to admit something is wrong?

T: I think because there are a number of negative connotations surrounding mental health within our community. And a lot of that has been because of what people hear or read in the news. I think it’s been easy for educators and people who deal with boys who’ve had challenges to take the easy route out, and say, Hey they’re just being a boy. But for me that wasn’t enough. I remember one of my friends saying to me, “You are his best advocate,â€ and that was all I needed to hear.

BE: Your son is young. Does he know he’s diagnosed with ADHD?

T: He does not know. He knows that he has his challenges, but he doesn’t know that there’s a name for it. It’s a very difficult conversation to have with a kid as young as he is. He did watch [an] interview with me that I did with WPIX, and we talked a lot about ADHD. I think it made him uncomfortable because it talked about his emotional displays.

BE: Focusing on your book, Oh Fiddlesticks!, the main character is a reflection of your son. Are the stories in the book real or just things that could happen?

T: The actual story of him losing his truck to another child didn’t actually happen, but I’ve had similar situations where Evan has overreacted to a very simple situation. That happens all the time. There are a lot of pieces of Evan in the book. He goes through a physical transformation when he gets really upset, and his anger starts to build. So the part where it shows him exploding, and saying he feels like he’s having an earthquake, that’s very real in my world. The throwing of things in the room when he gets upset, that is very real in my home. Childproof took on a whole new level. The coping skills in the back [of the book] are skills that we learned through the in-house therapist, and also through the program that Evan was in for a year. So those are all things that Evan was taught that I helped, that I learned as well because we had to go to family therapy at the program as a part of their initiative.

BE: How did you come up with the idea to name the book Oh Fiddlesticks!?

T: I love that question. It’s a very good one. It really came about in a very organic way. When I was writing the book and going through multiple versions of it, I kept thinking this character needs something that’s unique to him and something that he says because he just really can’t express [his] anger. And all of a sudden, one day, oh fiddlesticks just came out and that’s how it came to be. The initial name of the book was “When I Get Upset.” And when I came up with Oh Fiddlesticks, throughout the story, I asked my editor what she thought about me making that the title, and she said, “That’s perfect. That’s it!â€

BE: What advice do you have for parents dealing with a child who has yet to be diagnosed with anything, and teetering back and forth with their next steps?

T: My advice to them is, to the best of their ability, put aside their own issues and block out the naysayers and the negativity. Focus on what they can do to put their child in the best position for success. If that means going in and having them evaluated, [then] do that. Every family is different, but for me it was always about Evan. It was always about what can I do to make this child have the best possible life and opportunity. During times where people would say, Oh, he’s just being a boy, or, Oh, it’s just terrible two’s, I had to find a way to block that out and just focus on Evan. So that is my advice to other parents: focus on your child and what they need.

Blaze Your Own Trail: 5 Ways Millennials Can Kickstart Career